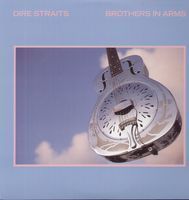 WOW!!! The sound was excellent, deep bass, great depth of soundstage, smooth rich tone and great dynamics! There is a reason they cut this Album on four full sides!"

Whatever you think of Knopler’s songwriting depth and the communicativeness of his delivery, there’s no denying the exquisite—though now sounding dated— mid-1980’s production quality. The sound quality of this album immediately attracted audiophiles back then and continues to do so today.

Even on his worst day, I wouldn’t bet against Bob Ludwig cutting at the Masterdisk lathe and the “RL MASTERDISK” original is still a potent sounding record. Stan Ricker’s half-speed cut, spread out over four sides, doesn’t attempt to re-create the original’s brash, forward and echoey sound. It’s somewhat drier, less “tinkly” and definitely gives musical images greater weight and more body. For instance, “Walk of Life” comes off far less “carnival-like” and I think that makes it a much better song. Ricker gives the album a warmer, more mature feel, with the half-speed mastering trading some brashness and edginess for greater true transient detail and a more burnished overall presentation.

Today, Brothers In Arms remains a rock essential - and now is offered as a completely uncompressed two-disc vinyl album for the ultimate in fidelity!

"I received the 180g 2 album set of Brothers in Arms and wanted to tell you that your assessment was spot on. The instruments are sharper and the whole soundstage is much more full than the studio pressing. It also seems as if there is more music. I do not remember the extended lead in for the first song on side two ("Walk Of Life") as well as the trailing notes for the last song on side 3 ("Ride Across The River"). I'm not a big fan of bloated bass, and even though the bass is considerably more full than the studio pressing, it was also more musical.

Amazing music. I will continue to search for this type of production quality. 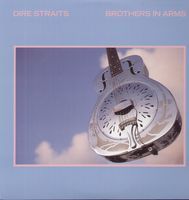