Neil Young - Everybody Knows This Is Nowhere - 180g LP 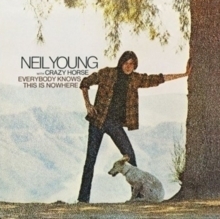 Because Sound Matters  - Mastered from the original analog tapes

Neil Young's second solo album, 1969's Everybody Knows This Is Nowhere cracked the Top 40, went platinum and included three of his most beloved songs, "Cinnamon Girl" and the nearly 10-minute epics "Down By The River" and "Cowgirl In The Sand." The album also introduced his associated band, Crazy Horse.

Whether as a singer, a songwriter or a guitarist, Neil Young has been one of the most influential and important artists of the rock era. Blending folk, country and rock, the acoustic and the electric, the melancholy and the hopeful, Young has been an icon for the uncompromising and unpredictable since the 1960s.

"Neil Young and Crazy Horse hadn't been together for more than eight weeks when they cut this album. It has the feel of a jam session conducted by master jammers, especially "Down by the River," "Cinnamon Girl" and "Cowgirl in the Sand." - .rollingstone.com