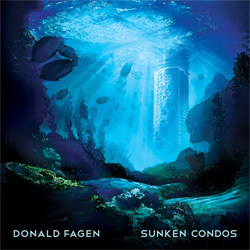 Mastered by Scott Hull at Masterdisc - Pressed at RTI

The 180-gram LP I listened to boasts remarkable clarity... The Cold War motif of 'Memorabilia' will resonate with Nightfly fans... 'Planet D'Rhonda'... its lush, airy soundscape ultimately won me over - that and the line about CPR." -  Sonics 4/5 - Jeff Wilson, The Absolute Sound,

Sunken Condos is Donald Fagen's fourth solo album for Warner Reprise. His first three solo albums, The Nightfly, Kamakiriad and Morph the Cat comprised the project known as the Nightfly Trilogy. Sunken Condos begins a new chapter in the creative evolution of this innovative artist, whose career is going strong after forty years. The nine tracks on Sunken Condos were co-produced by Michael Leonhart and Donald.

All but one track, an Ashkenazi recasting of Isasc Hayes' Out of the Ghetto, are Fagen originals. Some familiar names from the Steely Dan family of players are on hand (Jon Herrington, the Steely Dan horns, Freddie Washington) plus some new faces. The word is that, from now on, everything Donald does has got to be funky. Donald Fagen, the Grammy award winning voice of Steely Dan, since the '80s has continued to make an impact. “Sunken Condos is everything fans expect from the Steely Dan co-founder, keyboard mainstay and lead vocalist: wry humor, a look at relationships, a sense of unease and superb sound, with playing by a crack set of players.”

The band, especially guitarist Jon Herington, is predictably hot and smooth, Fagen's voice oily-sweet as ever... to this day, no one does booby-trapped boutique pop better.” - Will Hermes, Rolling Stone “Sunken Condos is jazzy, bluesy and as musically precise as anything Fagen has recorded, with or without Steely Dan."

The 180-gram LP I listened to boasts remarkable clarity... The Cold War motif of 'Memorabilia' will resonate with Nightfly fans... 'Planet D'Rhonda'... its lush, airy soundscape ultimately won me over - that and the line about CPR." - Music 3.5/5, Sonics 4/5 - Jeff Wilson, The Absolute Sound, February 2013,

1. Slinky Thing 2. I'm Not the Same Without You 3. Memorabilia Side Two: 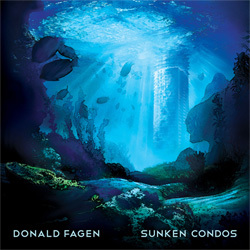