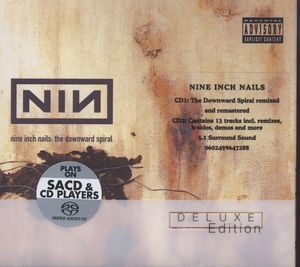 Originally released in 1994, Trent Reznor created The Downward Spiral as both concept album and modern day classic, almost sounding like a nihilistic Phil Spector’s wet dream. This influential ‘90s classic is Trent Reznor’s industrial-cum-tragic opera view of the world and the soul’s sonically detailed fall from grace. The Downward Spiral delves into despair and anger with hard guitars and brutal beats.

The Downward Spiral positioned Trent Reznor as industrial's own Phil Spector, painting detailed, layered soundscapes from a wide tonal palette. Not only did he fully integrated the crashing metal guitars of Broken, but several newfound elements -- expanded song structures, odd time signatures, shifting arrangements filled with novel sounds, tremendous textural variety -- can be traced to the influence of progressive rock. So can the painstaking attention devoted to pacing and contrast -- The Downward Spiral is full of striking sonic juxtapositions and sudden about-faces in tone, which make for a fascinating listen. More important than craft in turning Reznor into a full-fledged rock star, however, was his brooding persona. Grunge had the mainstream salivating over melodramatic angst, which had always been Reznor's stock in trade. The left-field hit "Closer" made him a postmodern shaman for the '90s, obsessed with exposing the dark side he saw behind even the most innocuous façades. In fact, his theatrics on The Downward Spiral -- all the preening self-absorption and serpentine sexuality -- seemed directly descended from Jim Morrison.

Yet Reznor's nihilism often seemed like a reaction against some repressively extreme standard of purity, so the depravity he wallowed in didn't necessarily seem that depraved. That's part of the reason why, in spite of its many virtues, The Downward Spiral falls just short of being the masterpiece it wants to be. For one thing, fascination with texture occasionally dissolves the hooky songwriting that fueled Pretty Hate Machine. But more than that, Reznor's unflinching bleakness was beginning to seem like a carefully calibrated posture; his increasing musical sophistication points up the lyrical holding pattern. Having said that, the album ends on an affecting emotional peak -- "Hurt" mingles drama and introspection in a way Reznor had never quite managed before. It's evidence of depth behind the charisma that deservedly made him a star.