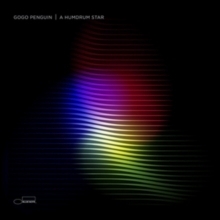 At work GoGo Penguin have been working for six years now. With success: in 2015 there was the record deal with Blue Note Records, 2016, the label debut "Man Made Object" and now the much awaited successor.

And as already on the predecessor, the trio from Manchester sounds like "A Humdrum Star" at times decelerating, sometimes futuristic and sometimes traditional, rhythmic and melodious, incredibly multi-layered and playful at the same time.

Complexity and precision meet the joy of playing and imagination: here is "A Humdrum Star", the new album by GoGo Penguin.

Go Go Penguin's genre-bending, EDM-influenced brand of jazz has earned the Manchester-based trio plaudits, including being shortlisted for the Mercury Prize in 2014. The band's fourth studio album, and second for Blue Note, 2018's atmospheric A Humdrum Star, finds them delving even deeper into an electronic-influenced sound that favors texture and mood over standards or jazz-based elements. Once again featured are bassist Nick Blacka, pianist Chris Illingworth, and drummer Rob Turner. Working with producers Joe Reiser and Brendan Williams, the trio offers a set of original compositions rife with skittering breakbeats, roiling piano melodies, and warm acoustic bass grooves. It's a style that seems informed as much by the computer-based production of Four Tet, and Amon Tobin as the hypnotic classical compositions of Philip Glass and the '70s jazz of Keith Jarrett. To achieve this cross-pollinated aesthetic, the band purportedly balance their compositional process between writing songs on their instruments and utilizing electronic production programs that they then translate to live instrumentation. As a result, these songs have the wave-like flow of electronic dance tracks but with the expansive, acoustic atmosphere of classic ECM recordings.