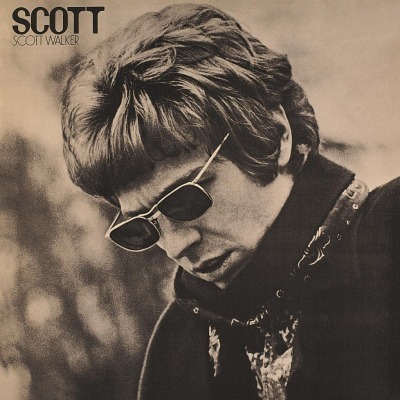 No one could deny Scott Walker is an unpredictable artist. Once the lead singer for the Walker Brothers (famous for their string laden Sixties defining hits "Make It Easy On Yourself" and "The Sun Ain't Gonna Shine Anymore") he released his first solo album Scott in 1967. Eschewing all Pop trends at the time, Walker stepped it up a notch, crooning with a nod to Frank Sinatra, Tony Bennett and chansonnier Jacques Brel. A pretty bold move indeed, in a time when Pop music sounded psychedelic, bare and up-tempo.

His philosophical lyrics are accompanied by lavishly orchestrated tracks making Scott a wildly interesting listen. His approach paid off: the album reached the Top 3 in Great Britain and was the first in a string of very successful solo albums. One of the songs on this album ("The Lady Came from Baltimore") was written by Tim Hardin, whose BIRD ON A WIRE is released
"Highlights include his exquisitely anguished rendition of Brel's classic 'Amsterdam' and his dramatic cover of the early-'60s Toni Fisher pop ballad 'The Big Hurt.'" - Richie Unterberger, allmusic.com
One of the most enigmatic figures in pop music history Scott Walker (nee Scott Engel) first saw massive success in England with his band The Walker Brothers in 1965. Not really brothers, nor were they British, the trio left the Hollywood seeking fame in England, and they found it there for a time with their particular brand of orchestrated pop. Following the groups demise in 1967 Walker set out to pursue solo stardom in perhaps the most peculiar way possible, with over-the-top baroque pop songs owing more to his idol Jacques Brel, Tony Bennett and Frank Sinatra than they did to the Beatles or the Stones. This is his first solo LP from 1967 and features 3 of his own compositions along with covers of songs by Brel, Tim Hardin, and the Brill Building team of Cynthia Weil and Barry Mann. A true original.
Scott Walker's success as a teen idol singer of Spectorish ballads with the Walker Brothers in no way prepared listeners for the mordant, despairing lyrics of his solo debut. To compound the surprise, he does his best to imitate the vocal girth of Tony Bennett and Frank Sinatra on this mix of original tunes and covers, which also features sweeping, bloated orchestral arrangements. It was hardly rock, and pop of a most oddball sort, but it found a surprisingly large audience -- in Britain, anyway, where it reached the Top Three in 1967. Poke behind the velvet curtain of the languid MOR arrangements, and one finds a surprisingly literate existentialist at the helm of these proceedings. His lyrical nuances were probably lost on his audience of predominately teenage girls, though they've earned him a small cult audience that endures to this day.
SIDE A
1. MATHILDE
2. MONTAGUE TERRACE (IN BLUE)
3. ANGELICA
4. THE LADY CAME FROM BALTIMORE
5. WHEN JOANNA LOVED ME
6. MY DEATH
SIDE B
1. THE BIG HURT
2. SUCH A SMALL LOVE
3. YOU'RE GONNA HEAR FROM ME
4. THROUGH A LONG AND SLEEPLESS NIGHT
5. ALWAYS COMING BACK TO YOU
6. AMSTERDAM
Browse this category: ROCK & POPULAR
Contact information
Scott Walker - Scott - 180g LP - SCOTT NANGLE AUDIO
T&C's and Privacy Policy