Categories CLASSICAL John Adams - Must the Devil Have All the Good Tunes? : Yuja Wang - 180g LP 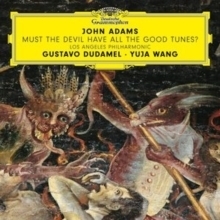 A recording by the Grammy-winning team of Los Angeles Philharmonic and Gustavo Dudamel. Featuring star Yuja Wang at the piano.

The work was commissioned by Los Angeles Philharmonic and was inspired by an article about Dorothy Day in the New Yorker.

There are features in common with the composer’s previous works in the form but gone is the sheen and broad, universal world view of Century Rolls. This is music that doesn’t get too comfortable in its own skin – or even in its own time signature...Wang and Dudamel make for ideal rival racing drivers. If Wang’s China Gates might not have the horizon focus of some other versions, her power, rhythmic fortitude and sense of fun put a rocket under the concerto.
It is terrifically played by Yuja Wang, wonderfully supported by Dudamel and the Los Angeles Philharmonic Orchestra. Wang completes the album with a lovingly flowing rendition of China Gates (1997), a reminder in four-and-a-half minutes of Adams’ minimalist roots.

Adams, J: China Gates
Adams, J: Must the Devil Have All the Good Tunes?