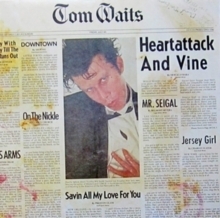 £19.99
Price includes VAT, plus delivery
Possible delivery methods: UK Tracked with Signature, Airmail Standard, UK Express, Airmail Tracked with Signature, UK Standard, Heavy Item
Remastered 180-gram pressing
Released in 1980, Heartattack and Vine was Waits' final album on Elektra Asylum and it built on the raw blues approach of Blue Valentine with the incendiary title track, the funky, organ driven "Downtown" and the stomping NOLA blues of "Mr. Siegal." This album also contains some of Waits most popular ballads, including "Jersey Girl" which was famously a hit for Bruce Springsteen. "On the Nickle" is a moving song about the homeless people who lived on 5th street in downtown LA, and "Ruby's Arms" is a beautiful song with a lovely Bach-like melody.
Side 1
01 Heartattack And Vine
02 In Shades
03 Saving All My Love For You
04 Downtown
05 Jersey Girl
Side 2
01 'Til The Money Runs Out
02 On The Nickel
03 Mr. Siegal
04 Ruby's Arms