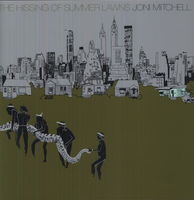 Featured in Michael Fremer's Heavy Rotation in the July 2008 Issue of Stereophile!

Speakers Corner Records has done an outstanding job in re-mastering The Hissing Of Summer Lawns. The overall engineering and sound quality is superior. All of Mitchell’s tonality (whether tender and brooding, or playfully brisk) is captured with warmth and agility. The stacked backup vocals are blended without density. The instrumentation is low-key, never invasive. Despite being nominated for a Grammy, the album got a lukewarm reception. It may be time for a serious re-evaluation based on the outstanding fidelity of this reissue.

Originally released in 1975, The Hissing Of Summer Lawns is a stunning work of art conceived as a graphic, musical, and lyrical whole. Leaning even more towards the jazz idiom than Joni Mitchell's previous release, Court and Spark, the collection features the introduction of the great Burundi on drums and is highlighted by the excellent guitar playing of frequent session collaborators Larry Carlton and Robben Ford. As adventurous and lyrically deep as anything Joni Mitchell has ever done, the 1974 album remains a classic.

You've never heard this classic with such detail, presence, openness, clarity, or richness. This sumptuous remaster was handled with extreme care; no expense was spared or corner cut in making this 180g LP the very ultimate listening experience. Hear Mitchell play in your living room, complete with lifesize imaging and an ultra-realistic soundstage. You'll wish every LP sounded so sublime.

For many, the soft and crystal-clear voice of Joni Mitchell at the beginning of her career will remain indelible in their memory. The innovative style of her peaceful, folk guitar music caught the attention of David Crosby, member of the highly popular band Crosby, Stills, Nash & Young, and in 1968 he produced her very first album.

Only three years later she became inspired by the cool flow of modern jazz and set off on new musical paths. The Hissing of Summer Lawns represents a great leap away from the folk scene. Even the very first number, "In France They Kiss On Main Street" stands out thanks to its surprisingly unconventional melodic writing.

Speakers Corner Records has done an outstanding job in re-mastering The Hissing Of Summer Lawns. The overall engineering and sound quality is superior. AudiophileAudition Sound 4.5/5

1. In France They Kiss On Main Street

3. Edith And The Kingpin

6. The Hissing Of Summer Lawns 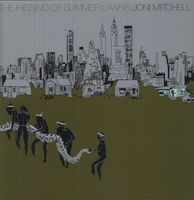