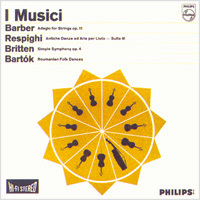 To compile a music sampler might seem simple, but the conceivers of this LP set themselves several hurdles to spice up their task. Among the infinite possibilities of an overall binding element, they chose to put together works by modern composers who reached back to past traditions. Because most pieces are arrangements for I Musici - a chamber ensemble that tends to favor baroque conventions - one might imagine that all works sound somewhat similar.

But less can also mean more, for Respighi's heavyweight sound in his arrangements of ancient dances is hardly missed thanks to the ensemble lending the work a light and airy warmth. Barber's Opus 11, originally conceived as a quartet, has gained in sound coloring and once again proves itself as a true essential among all Adagios. Bartok's artistically convoluted Folk Dances prove themselves to be real little gems in Arthur Willner's transcription.

The orchestra quite obviously delights in conjuring up the delicate melodies and tingling pizzicato, while the stamping peasant rhythms are played with gusto. Closest here to the original sound is Britten's Simple Symphony, composed for a school orchestra, in which Britten makes use of favorite tunes from his youth. The reason that this composition - shot through with pizzicato from beginning to end - has been arranged for an orchestra of plucked instruments cannot and will not remain a secret for anyone listening to this perfect interpretation.

Thisis an immensely enjoyable release. Here one has a style of playing that is virtually dead and the sheer professionalism and sound of I Musici commands attention.
This particular disc of twentieth-century pieces is rare, but not collectible (it never fetches more than £20 at auction). As with the Argerich the Speakers Corner transfer hasreal presence and power. There is excellent definition and the bass is extended and tight  - ClassicalSource 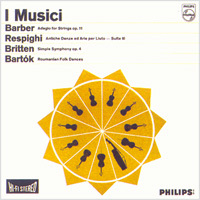