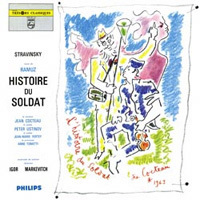 The creation of "Histoire du Soldat" is closely connected with actual incidents during the war. Because the local theatre was closed in 1918, the last year of the war, Stravinsky and the Swiss writer Charles Ferdinand Ramuz decided to create a work that did not demand a large venue or big audience to be effective. The result was a theatrical work for a small ensemble consisting of a narrator, two actors, a dancer and seven musicians.

On a par with the sparsity of the resources is the tightly knit construction of the work in which the scenes and musical sections are strung together like a suite. Just as in his ballets, Stravinsky relies on the dance-like energy of his music, which not only includes various march rhythms but also the tango, waltz and ragtime. The spoken word is also brimful of rhythmic vitality and is impressively rendered by the enormously adaptable voices of Jean Cocteau as the Narrator and Peter Ustinov as the Devil.

Igor Markevitch urges on the excellent musicians in his little orchestra with élan and accuracy, with the young Maurice André’s brilliantly performed trumpet part being particularly conspicuous. "Markevitch's recording of The Soldier's Tale can be considered definitive. ...The conductor's reading is suitable anti-Romantic, crisp, taut, and unsentimentalized though never cold. The playing of the seven instrumentalists is unassailable..."

It is pointless to look for a recording that is remotely as good as this one. It doesn’t exist!

This LP caught me off guard in several ways. My only real relationship with Stravinsky’s Historie Du Soldat has been strictly orchestration only. So the amount of dialogue came as a surprise. It was created though as a theatrical work for a small ensemble consisting of a narrator, two actors, a dancer and seven musicians. This is what you get here and I was surprised it turned out to be a pleasant one.
The music has a very dance-like energy, that kind of combines marches, dances, and even a hint of ragtime. While there is a little more dialogue than I would like, I was very surprised by how rhythmically and musically it was spoken. Igor Markevitch certainly seems to get the most out of his little orchestra. Maurice André’s trumpet parts manage to steal the show without ruining it.
I also want to give a thumbs-up to Speakers Corner for another great reissue. Admittedly, this LP stretched me just a little out of my comfort zone, but I still recommend it for both performance and sound.