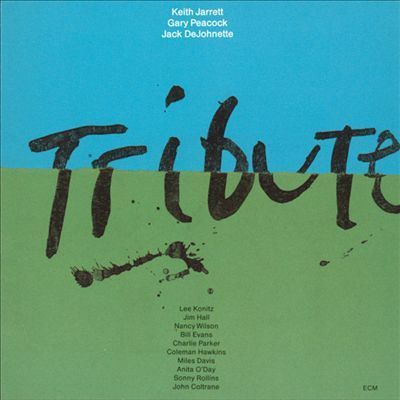 Trubute gets back down to business with two LPs ' worth of familiar and perhaps not-so-familiar tunes, recorded in one evening in Cologne, Germany.

There is a concept this time, for all the standards carry a dedication to some jazz man or woman who performed them -- and they are not predictable choices; for "Lover Man,"

"It's Easy to Remember" for Coltrane "All of You" for Miles  etc. Almost every number has a reflective solo piano introduction, with one of the notable exceptions being the rolling, convoluted opening variations on "All the Things You Are" Rollins  "Solar" Evans has challenging, fractured interplay

Tribute is a live album by American pianist Keith Jarrett's "Standards Trio" featuring Gary Peacock and Jack DeJohnette recorded in concert in October, 1989 at the Philharmonie in Cologne (Köln), West Germany and released on the ECM label. The trio perform songs by the likes of Lee Konitz, Miles Davis, Sonny Rollins, John Coltrane, Charlie Parker, and more.
Keith Jarrett is an American pianist and composer who performs both jazz and classical music. Jarrett started his career with Art Blakey, moving on to play with Charles Lloyd and Miles Davis. Since the early 1970s he has enjoyed a great deal of success as a group leader and a solo performer in jazz, jazz fusion, and classical music. His improvisations draw from the traditions of jazz and other genres, especially Western classical music, gospel, blues, and ethnic folk music.

In 2003, Jarrett received the Polar Music Prize, the first (and to this day only) recipient not to share the prize with a co-recipient, and in 2004 he received the Léonie Sonning Music Prize. In 2008, he was inducted into the Down Beat Hall of Fame in the magazine's 73rd Annual Readers' Poll.Keith Jarrett Trio