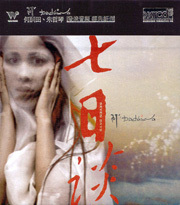 Dadawa is the artistic name of Zhu Zheqin, a young Chinese woman who is celebrated both in China and the West. Dadawa has been well received in the West, the beauty of her voice and soft, ambient music appealing to both fans of Asian and New Age music. She is a native of Changsha, Hunan, China and has traveled China and the world extensively as both a musician and adventurer. Dadawa's many performances and recordings have received rave reviews in the NY Times, Time Magazine, Washington Post, The Times, BBC, ABC, NHK and CNN!  Dadawa returns to singing with 2006’s Seven Days, an album that finds Chinese folk melodies replacing the Tibetan ones of previous albums while keeping the lush, ambient orchestration. Musically, the concept heads more towards Chinese traditional folk songs. However, her trademark beautifully sung melody lines, East Asian percussion and ambient electronic and classical instrumentation persists.

Being the first musical artist from mainland China to release an international album since 1950, Dadawa (born Zhu Zheqin in Guangzhou Province, China, during the early '70s) went to Tibet to draw on that culture for her first record. Dadawa's father was a science editor and she studied to be a teacher, but switched to professional singing in her early '20s. When she entered and won a TV talent contest, composer He Xuntian along with his brother, He Xunyou, discovered her. Under their mentorship she changed her name and was soon performing on television in France, Spain, and Sweden. In 1993, they spent several months in Tibet and in 1994, they started composing and recording.
Warner Brothers International released Dadawa's debut album, Sister Drum, in 1995. On it, the Chinese artist sang her own interpretation of Tibetan music accompanied by drum, horn, and flutes, creating a mystical and ethereal atmosphere. Because of the Chinese government's suppression of Tibet, Sister Drum met with considerable fury from those concerned with the brutal exile of Tibetans and the squashing of its religion. Many felt it was an expression of Han cultural imperialism, finding unbearable insults in Dadawa's wearing a nun's robe on the cover jacket and chanting and mispronouncing sacred mantras accompanied with a pompous orchestral background. This Chinese claim on the traditional Tibetan culture was also haunting to many as it implied the Tibetans are ancient and backward, but not a different country than China. The political overtones were also evident when the single "Sister Drum" came out, showing Dadawa hugging the wall of the Buddhist's sacred temple, Jokhang, a place where even the international media are barred. Perhaps because of the controversy, the album sold over a million copies and gave Dadawa the honor of recording the first international album to come out of China in over 45 years.
1.   Flown Away
2.   Fragrant Nirvana Tree
3.   In the Setting of the Sun
4.   Already Song
5.   Satori
6.   Passing by the Earth
7.   The Seventh Day
Browse these categories as well: ELECTRONICA, ROCK & POPULAR, SACD / CD, Home page
Contact information
Dadawa - Seven Days - XRCD2 - SCOTT NANGLE AUDIO
T&C's and Privacy Policy