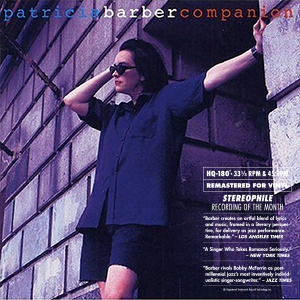 Barber ain't your father's Oldsmobile," crowed Chip Stern in his January 2000 "Recording of the Month" review of this live album. CS crowned Patricia Barber "a master deconstructionist with a propensity for sustaining musical moodscapes in a rich narrative style with an ironic, languid, Raymond Chandler kinda film-noir edge (by way of brand-new-used Annie Ross)."  I totally agree. The extraordinary ambiance and tonal values on this LP—recorded live at the Green Mill in Chicago—have made it a permanent part of my six-disc portable pack for reviewing equipment and visiting CES shows. I'm struck by Barber's "smoky, world-weary" voice and the "combustible and painterly" energy of her band, to use Chip's words. The pulsating stand-up bass on "Use Me" vibrates all my cabinets. "Like LJ" is stunning in the drive, impact, and pitch definition of Michael Arnopol's string bass, Ruben Alvarez's bongos, and Eric Montzka's drum kit. No matter how many times I listen, Companion remains fresh and intense - Stereophile

Premonition Records has done a superb job in re-mastering this audiophile vinyl. Despite the live venue the acoustics are comparable to a studio. The stereo separation is dynamic. Every instrument is clear at all times. Barber’s low-range voice has a soft, brooding quality. The packaging is top notch, including a high-gloss album cover and gatefold, not to mention plastic record sleeves. Whether you are an audiophile or jazz aficionado, Companion is a treat! - AudiophileAudition

A Stunning Recording ,  A Legendary Live Show  Remastered from the Original Analog Masters,

Patricia Barber’s Companion was a record of firsts for Barber and Premonition. First recording of Barber’s legendary live show. First release under the Blue Note/Premonition joint imprint, the only such business arrangement in Blue Note’s storied history.

And first Stereophile RECORDING OF THE MONTH. Designed as a “companion” to Barber’s previous studio recording Modern Cool, the album features several re-invented Modern Cool tracks, some of the best Barber pop covers on record and one ingenius new Barber original.

This issue of Companion was re-mastered for vinyl by the great Doug Sax from the Original Analog Master Mixes and features three sides at 33 1/3 and one side at 45 RPM so that listeners get the full original release plus two bonus tracks and enjoy the opportunity to compare Sax’s mastering to that of MoFi’s 2002 LP version. Without doubt, listeners will be impressed.

A stunning recording -- an audiophile favorite since it’s 1999 release -- given new life by one of the great mastering engineers of our time.

"In an aviary full of mynah birds, Patricia Barber flies alone. For a sensitive lug like moi, she's the ultimate anti-diva, the failed romantic's last hope amid the antediluvian cant of the new classicism." - Stereophile 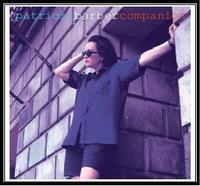