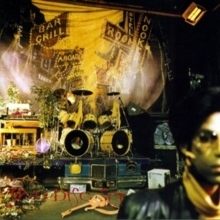 "Fearless, eclectic, and defiantly messy, Prince's Sign 'O' the Times falls into the tradition of tremendous, chaotic double albums like The Beatles, Exile on Main St., and London Calling -- albums that are fantastic because of their overreach, their great sprawl. Prince shows nearly all of his cards here, from bare-bones electro-funk and smooth soul to pseudo-psychedelic pop and crunching hard rock, touching on gospel, blues, and folk along the way. This was the first album Prince recorded without the Revolution since 1982's 1999 (the band does appear on the in-concert rave-up, 'It's Gonna Be a Beautiful Night'), and he sounds liberated, diving into territory merely suggested on Around the World in a Day and Parade. While the music overflows with generous spirit, these are among the most cryptic, insular songs he's ever written.

Many songs are left over from the aborted triple album Crystal Ball and the abandoned Camille project, a Prince alter ego personified by scarily sped-up tapes on 'f I Was Your Girlfriend,' the most disarming and bleak psycho-sexual song Prince ever wrote, as well as the equally chilling 'Strange Relationship.' These fraying relationships echo in the social chaos Prince writes about throughout the album. Apocalyptic imagery of drugs, bombs, empty sex, abandoned babies and mothers, and AIDS pop up again and again, yet he balances the despair with hope, whether it's God, love, or just having a good time. In its own roundabout way, Sign 'O' the Times is the sound of the late '80s -- it's the sound of the good times collapsing and how all that doubt and fear can be ignored if you just dance those problems away."