Antonio Lysy - At The Broad Music From Argentina - 180g LP 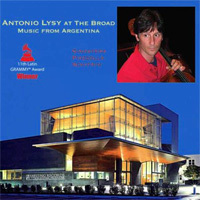 I've played this record repeatedly over the past few days and I can't get enough.

When it's over you'll sit in stunned silence, I guarantee! — Michael Fremer

This album was named 'One Of The 40 Best Recordings Of All Time' by The Absolute Sound.

Classical music recorded all-analog using purist microphone techniques are few these days. Here is one from Bob Attiyeh's Yarlung Records that is both sonically and musically exquisite. Music first: Antonio Lysy is a world-renowned cellist and son of Argentinian born violinist Alberto Lysy who was a protege of Yehudi Menuhin. The father performed with Casals, Jacqueline DuPré, Benjamin Britten and Nadia Boulanger. The son has done pretty well for himself too, playing solo recitals and with first tier orchestras at top concert venues throughout Europe and around the world.  On this record, he's joined by Bryan Pezzone, who performs with the Los Angeles Chamber Orchestra, the L.A. Philharmonic among others. Also onboard is Argentinian bass player Pablo Motta, who plays with various Tango and big band ensembles and The Capitol Ensemble, a string quartet that has played with Rostropovich, Neville Mariner, Janos Starker, Michael Tilson Thomas, the aforementioned Menuhin and Leonard Bernstein. The point I'm trying to get across with those credits is that this is music making of the highest caliber to go along with analog recording quality of the highest caliber. How often does that happen? The repertoire consists of music written by Argentinian composers Alberto Ginastera, Lalo Schifrin, and Tango master Astor Piazzolla. Some musicangle readers might be familiar with Ginastera from the "Estancia" and "Panambi" ballet suites that were on Classic Records' superb reissue from 35MM tape of Everest SDBR 3041, which featured Villa-Lobos' delightful "The Little Train of the Caipira" from Bachianas Brasileiras No. 2". About the sound: this was recorded at The Broad Stage in Santa Monica using an AKG C-24 stereo tube microphone fitted with its original brass C12 tube, to Agfa 468 tape. Cables were Yarlung-Records-designed stranded silver interconnects, preamps were customized with no mixer involved.

Doug sax and Sangwook Nam mastered for vinyl at The Mastering Lab with no compression or limiting.

According to engineer Attiyeh, the LP sounds "just like the master tape." I believe him!

If this recording doesn't move you emotionally you are brain dead.

If you don't agree that this is one of the finest recordings you have ever heard, your system needs to go in for repairs. 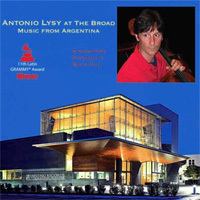