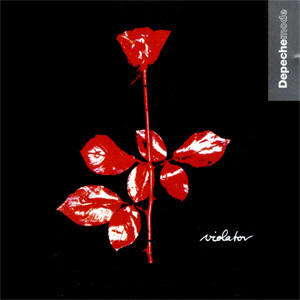 Their best-selling, 1990 masterpiece, Violator, hit #7 Billboard and was cited in Rolling Stone's list of "The 500 Greatest Albums of All Time". The album features the Top 40 smash hits "Enjoy the Silence", "Policy of Truth", and "Personal Jesus", plus the classic "World in My Eyes".

"For many Depeche Mode fans, Violator is the crowning glory of the boys' black-leather period. In "Sweetest Perfection," "Halo" and "World in My Eyes," they turn teen angst and sexual obsession into grand synth-pop melodrama, and their attempt at guitar rock resulted in a hit with "Personal Jesus." - www.rollingstone.com
In a word, stunning. Perhaps an odd word to use given that Violator continued in the general vein of the previous two studio efforts by Depeche Mode: Martin Gore's upfront lyrical emotional extremism and knack for a catchy hook filtered through Alan Wilder's ear for perfect arrangements, ably assisted by top English producer Flood. Yet the idea that this record would both dominate worldwide charts, while song for song being simply the best, most consistent effort yet from the band could only have been the wildest fantasy before its release. The opening two singles from the album, however, signaled something was up. First was "Personal Jesus," at once perversely simplistic, with a stiff, arcane funk/hip-hop beat and basic blues guitar chords, and tremendous, thanks to sharp production touches and David Gahan's echoed, snaky vocals.
Selections:
1. World In My Eyes
2. Sweetest Perfection
3. Personal Jesus
4. Halo
5. Waiting For The Night
6. Enjoy The Silence
7. Policy Of Truth
8. Blue Dress
9. Clean