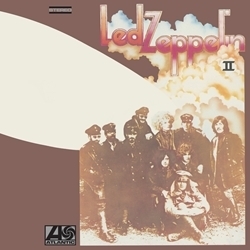 John Bonham, John Paul Jones, Jimmy Page and Robert Plant came together in 1968 as Led Zeppelin. Over the next decade, the band would become one of the most influential, innovative and successful groups in modern music, selling more than 300 million albums worldwide. Their songs are some of the most celebrated in rock 'n' roll history that, to this day, resonate with fans young and old around the globe. Still, no matter how many times you may have listened to their music, you've never heard Led Zeppelin like this before.
Painstakingly remastered from the original master tapes by guitarist Jimmy Page, and pressed at Pallas (Europe's best plant), this 180g LP of Led Zeppelin II sounds utterly amazing. Page spent years on this project with one goal in mind: Making these reissues the end-all-be-all definitive editions of his iconic band's records.
He has succeeded, and then some. In addition to the reference-caliber audio, each LP features packaging that fully replicates the look of the first pressing of the original album. .
The band wrote and recorded nearly all of Led Zeppelin II while touring relentlessly to support its debut album. Incredibly, the album was released just seven months after Led Zeppelin in October of 1969. Led Zeppelin II features some of the band's most beloved tracks including "Ramble On" and "Heartbreaker" as well as "Whole Lotta Love," considered by many to be one of the greatest rock n' roll songs of all time. The album is certified diamond by the RIAA with sales of over 12 million copies.
Newly Remastered by Jimmy Page from the Original Master Tapes   Pressed at Pallas in Germany on 180 Gram Vinyl
Musicians:
John Bonham, drums, tympani, backing vocals
Robert Plant, lead vocals, harmonica
Jimmy Page, electric guitar, acoustic guitar, pedal steel guitar, backing vocals
John Paul Jones, bass, organ, backing vocals
Led Zeppelin Led Zeppelin II Track Listing:
Selections:
Side A:
1. Whole Lotta Love
2. What Is And What Should Never Be
3. The Lemon Song
4. Thank You
Side B:
1. Heartbreaker
2. Living Loving Maid (She’s Just A Woman)
3. Ramble On
4. Moby Dick
5. Bring It On Home