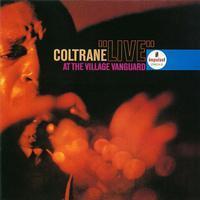 If you get a chance to compare an original A-10 with this reissue you'll appreciate how fine this reissue sounds but you'll also hear greater texture to Coltrane's horn(s), far more 'room sound,' and especially cymbal 'ring'. The original is 'you are there' great, in part thanks to RVG's dozen microphone mixing, but you know what? If you never get to hear the original this reissue is 'you are there' great too." — Music = 11/11; Sound = 9/11 — Michael Fremer,
"Coltrane typify the breadth of (Coltrane's) range and the depths of his explorations. ... The sound quality  engineered by Rudy Van Gelder and mastered by Ryan Smith, is very good, with caveats. Vanguard is from a second LP master; the original tapes vanished long ago. ... This reissue lacks the full warmth and air of the original pressing, but good luck finding one. This is much better than any other reissue." — Fred Kaplan, Stereophile
Acoustic Sounds Series reissues from Verve/Universal Music Enterprises!
Sax virtuoso John Coltrane "Live" at the Village Vanguard (Impulse! AS-10), was Trane's first official "live" album. Coltrane is joined here on two tunes by the wonderful Eric Dolphy on bass clarinet, plus veteran sidemen McCoy Tyner on piano, Elvin Jones on drums, and Jimmy Garrison & Reggie Workman alternating on bass (both play together on "India," one of three tracks from the same sessions added here as a bonus). Right after the Village dates, Trane and Dolphy would embark on a successful European tour.

"Live" At The Village Vanguard was released in February 1962 on Impulse Records, the first album to feature the members of the classic quartet of Coltrane with McCoy Tyner, Jimmy Garrison and Elvin Jones, and the first Coltrane live album to be issued. Recorded live over four nights in November 1961, the album contains Reggie Workman's final recordings with the group on Side One, with Garrison taking over bass duties on Side Two. Eric Dolphy plays bass clarinet on the track "Spiritual".

Seeking to offer definitive audiophile grade versions of some of the most historic and best jazz records ever recorded, Verve Label Group and Universal Music Enterprises' audiophile Acoustic Sounds vinyl reissue series utilizes the skills of top mastering engineers and the unsurpassed production craft of Quality Record Pressings. All titles are mastered from the original analog tapes, pressed on 180-gram vinyl and packaged by Stoughton Printing Co. in high-quality gatefold sleeves with tip-on jackets.