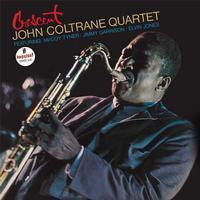 Ryan Smith has done a masterful job (no pun intended) Sound 10/10 Michael Fremer
Remastered by Ryan Smith at Sterling Sound, this reissue, which was pressed at Quality Record Pressings, blends the channels into a seamless soundstage, one that sounds more natural than that of my original mono pressing. The analogue tapes used to produce the reissue sound like they remain in very good shape.  but the resulting sound cannot be seriously faulted. In some subtle ways relating to air and delicacy, I’d have to give the slight edge to my original mono pressing, but this reissue’s increase in dynamics and punch, coupled with the wonderful soundstage and impressive tonal quality, make it the one I’ll reach for most often - Sound 4.5/5 Theaudiobeat
Acoustic Sounds Series reissues from Verve/Universal Music Enterprises!
Released in 1964, Crescent is one of sax master John Coltrane's finest albums, featuring the talents of McCoy Tyner, Jimmy Garrison and Elvin Jones. During 1964 John Coltrane spent the least amount of time in the recording studio of his entire solo career. It wasn't until April 27 that ‘Trane, along with Tyner, Garrison and Jones went to the familiar surroundings of Rudy Van Gelder's Englewood Cliff's studio to begin work on the album that came to be called, Crescent.
They recorded all the tracks that appear on Crescent, along with "Songs Of Praise," but not the final versions of the album's five tracks. From that first day's recording the ones that make the final cut are, "Lonnie's Lament," "The Drum Thing" and "Wise One." The first two of these three tracks make up all of side two of the album and on "Lonnie's Lament" Coltrane does not solo at all, instead it features a long bass solo by Garrison.
Garrison's widow recalled that this album along with A Love Supreme, which was released a year later in 1965, were the two that her husband listened to the most.
In the liner notes, a quote from Leroi Jones/Amiri Baraka states John Coltrane was 'daringly human,' and no better example of this quality transferred to musical endeavor is available than on this definitive, must have album that encompasses all that he was and eventually would become.
Musicians
John Coltrane tenor saxophone
McCoy Tyner piano
Jimmy Garrison bass
Elvin Jones drums
Side A
1. Crescent
2. Wise One
3. Bessie's Blues
Side B
1. Lonnie's Lament
2. The Drum Thing