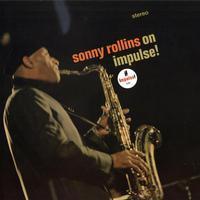 Acoustic Sounds Series reissues from Verve/Universal Music Enterprises!
Monthly releases highlighting the world's most historic and best jazz records!
Mastered by Ryan K. Smith at Sterling Sound from the original analog tapes
180-gram LPs pressed at Quality Record Pressings!
Stoughton Printing gatefold old-style tip-on jackets
"If anything, Sonny Rollins on Impulse! feels as if it were a recording Rollins had to get out of his system. But thank goodness for us because it's a winner through and through." — AllMusic
Seeking to offer definitive audiophile grade versions of some of the most historic and best jazz records ever recorded, Verve Label Group and Universal Music Enterprises' new audiophile Acoustic Sounds vinyl reissue series utilizes the skills of top mastering engineers and the unsurpassed production craft of Quality Record Pressings. All titles are mastered from the original analog tapes, pressed on 180-gram vinyl and packaged by Stoughton Printing Co. in high-quality gatefold sleeves with tip-on jackets. .
In 1965 and 1966, tenor giant Sonny Rollins issued three albums for the Impulse! label. They were his last until 1972 when he re-emerged from a self-imposed retirement. Here on this July 8, 1965 date, Rollins attacks five standards with a quartet that included pianist Ray Bryant, bassist Walter Booker and drummer Mickey Roker.
Rollins digs deeply into pulse and rhythm, leaving melody to take care of itself. AllMusic says "This is not a 'new thing' date but instead focuses on playing according to the dictates of the rhythm section and on interchanging with Booker and Roker, leaving much of the melodic aspect of these tunes to Bryant. Rollins could never quite leave the melody out of anything he played because of his intense gift as a lyrical improviser; he nonetheless stripped his approach back and played tunes like 'On Green Dolphin Street' by improvising according to theme rather than strict melody, where his interplay with the rhythm section becomes based on the dynamic and shifting times played by Roker. While things are more intimate and straight on 'Everything Happens to Me,' he nonetheless plays the edges, filling the space like a drummer. Melody happens throughout, the tune is recognizable, but it is stretched in his solo to a theme set by the shimmering cymbals and brushed snare work of Roker. The oddest cuts in the set are the last two; spaced out readings of 'Blue Room,' and 'Three Little Words'; they sound as if he were preparing the listener for a true change in his approach.
"Melody gets inverted, with spaces and syncopation taking the place of notes. The swing is inherent in everything here, but it's clear that the saxophonist was hearing something else in his head, the way he squeezes notes tightly into some phrases where they might be placed elsewhere, and substitutes small, lithe lines inside Bryant's solos which dictate the harmonic intervals more conventionally with his singing approach. And speaking of rhythm, the album's hinge piece is the burning calypso 'Hold "Em Joe.' Here again, as Bryant's changes play it straight, Rollins shoves his horn inside them and draws out the beat on his horn over and over again."
Side A
1. On Green Dolphin Street
2. Everything Happens To Me
Side B
1. Hold 'Em Joe
2. Blue Room
3. Three Little Words