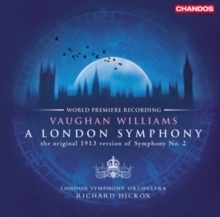 Chandos presents its second recent LP re-release, the distinguished première recording of Vaughan William’s A London Symphony in its original 1913 version. This recording, featuring Richard Hickox and the London Symphony Orchestra, was met with universal critical acclaim upon initial release, being ‘destined for classic status’, according to Gramophone.

The Banks of Green Willow is a sensuous work which incorporates two folksongs that Butterworth had collected in 1907. It was he who first suggested to Vaughan Williams that he should write an orchestral symphony and, after the tragic death of Butterworth, Vaughan Williams dedicated A London Symphony to his memory. The work was first performed at the Queen’s Hall in London in 1914, and, as on this LP, was programmed after The Banks of Green Willow. Following the loss of the full score in 1914 it was reconstructed from the orchestral parts. Vaughan Williams then revised the symphony three times: in 1918, 1920, and 1933, and the well-known ‘Revised Edition’ was published in the mid-1930s. The original version, heard here, contains about twenty minutes of music not included in the familiar final version, among it (according to Bernard Herrmann) some of ‘the most original poetic moments in the entire symphony’. This recording remains the only one of the original 1913 version of A London Symphony.