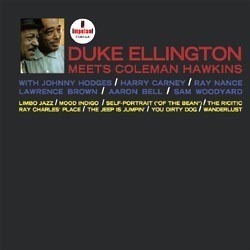 Acoustic Sounds Series reissues from Verve/Universal Music Enterprises!
"One of the great Ellington albums, one of the great Hawkins albums and one of the great albums of the 1960s." — The New York Times
Even though Duke Ellington and Coleman Hawkins had both been well-known jazzmen since the early 1920s and continued to be successful until their deaths, their only recorded encounter was the LP Duke Ellington Meets Coleman Hawkins (Impulse AS-26), taped in 1962 and presented here in its entirety.
Hawkins had been an admirer of Duke Ellington's music for at least 35 years at this point and Ellington had suggested they record together at least 20 years prior to their actual meeting in 1962. Although it would have been preferable to hear the tenor sax great performing with the full orchestra, his meeting with Ellington and an all-star group taken out of the big band does feature such greats as Ray Nance on cornet and violin, trombonist Lawrence Brown, altoist Johnny Hodges, and baritonist Harry Carney. High points include an exuberant "The Jeep Is Jumpin'," an interesting remake of "Mood Indigo," and a few new Ellington pieces. This delightful music is recommended in one form or another.
Recorded at Rudy Van Gelder Studio, Englewood Cliffs, New Jersey, on August 18, 1962 and released in February 1963 by Impulse! Records.
Musicians:
Coleman Hawkins, tenor sax
Duke Ellington, piano
Ray Nance, cornet and violin
Johnny Hodges, alto sax
Harry Carney, baritone sax and bass clarinet
Aaron Bell, bass
Sam Woodyard, drums
Side A
1. Limbo Jazz
2. Mood Indigo
3. Ray Charles' Place
4. Wanderlust
Side B
1. You Dirty Dog
2. Self Portrait
3. The Jeep Is Jumpin'
4. The Ricitic
Browse this category: JAZZ
Contact information
Duke Ellington & Coleman Hawkins - Duke Ellington Meets Coleman Hawkins - 180g LP - SCOTT NANGLE AUDIO
T&C's and Privacy Policy