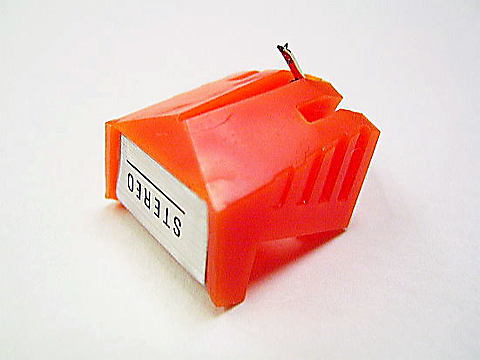 The tip of the Super Analog Stylus is carefully chosen from single-crystal natural diamonds. The laser-cut diamond closely resembles that of the cutting stylus used on a cutting lathe to produce the acetate master disks used in vinyl production. This allows the SAS tip to reach into the deepest recesses of the record groove in order to retrieve details which were previously inaccessible to other stylus profiles. Due to its wide contact area with the groove wall, the SAS can reproduce a more expansive bandwidth of information with higher fidelity.

Boron Cantilever
Boron is one of the most suitable materials for cantilevers; its density is low, Young’s modulus is large, and the speed of sound propagation is approximately 2.6 times faster than that of aluminum. Due to the characteristics above, boron cantilever can more precisely trace the information contained in the record grooves than aluminum cantilever.

The stylus is a whole diamond, specially shaped and glued or fastened to the cantilever. b. BONDED / Tipped diamond - Least Expensive option

To maintain the playback fidelity of your mono record you really need to use a stylus designed for mono records. The 2.0 mil mono stylus is the standard for mono records. A very common misconception is that you can use a LP stylus for playing mono records and obtain remarkable results. You cannot because the LP stylus is narrower than the 1.0 mil mono record groove, hence the tip will slide to the bottom of the groove where debris has collected for many decades. A LP stylus will also slide side to side and will not trace the grooves properly. The use of a LP stylus will thus result in poor sound quality and extraordinarily high surface noise.
The generally accepted tip radius for playback of 78 RPM records is 3.0 Mil (0,003 inch).
Due to the playback in the past of these very old records with very high stylus pressure or even
with steel needles a lot of damage has been caused to the grooves. This damage is
the cause of a lot of distortion and back-ground noise. Sometimes better results can
be achieved by playing the record either on a lower part or a higher part of the groove
which may have been damaged less than the average height. To play-back at a higher
level, use either the 3.5 mil, 4.0 mil. To playback at a lower groove level use either
the 2.0 mil, or 2.5 mil tip. When you have found the best height affix a sticker to the
record so you will know the next time which stylus tip to use for best results.
Browse this category: REPLACEMENT STYLUS / Needles
Contact information
Aiwa AN87/43 Jico SAS/B ( Super Analogue Stylus ) for Cartridge ( AN87-43 ) - SCOTT NANGLE AUDIO
T&C's and Privacy Policy