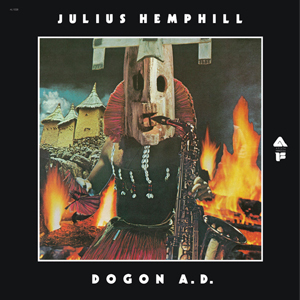 One of the everlasting monuments of spontaneous avant-garde/out jazz jamming... one of the first times that out jazz proved it could get deeply, truly funky... International Phonograph Inc. first reissued Dogon A.D. in 2011, on CD, and now has finally released a remastering, on two 200gm LPs cut by the late Doug Sax, that is a sonic upgrade over the better-known Arista issue and IPI's own CD edition." - Robert Baird, Stereophile, Performance 5/5, Sonics 4.5/5

The LP is just beautifully mastered, one track per side, via Doug Sax. Even before we get to the music itself, the discs are very quiet. This is a superbly crafted pressing. I actually thought that my right hi-fi channel had died and was on the way to see what the problem was before music spurted from the speaker, stopping me in my tracks. Lovely. Tonally balanced, with air and space to spare in and around the soundstage, every instrumentalist has room to perform, giving the music a relaxed and easy feel.A tremendous piece of music, a startling master on a terrifically pressed vinyl contained within quality packaging. What more do you want? Custard on it? - Audiophileman

Considered by many as a true jazz classic, Julius Hemphill's Dogon A. D. is listed by the New York Times as one of the 100 Most Essential Jazz Recordings.

A fundamental statement of a new era in jazz music, Hemphill's performance here avoids the loud, instinctual blowing so many other jazz musicians defaulted to in the early 70s, and instead provides lean instrumentation, blues, funk, and avant-garde chamber jazz. Long out of print on vinyl, and never issued on CD, the 1972 performance is here reissued on a two-disc LP plated and pressed at Quality Record Pressings! in a limited edition.

Remastered from original master tapes for vastly improved sound quality over all previous vinyl pressings, and including as a bonus the monumental twenty minute cut The Hard Blues, recorded at the same February 1972 sessions as the three other tracks on Dogon A. D. but not originally issued on that album (it appeared instead as side two of his other Arista/Freedom album, 'Coon Bid'ness).

Voted as one of the 100 most essential jazz recordings of all time by NY Times critic Ben Ratliff.

Dogon A.D. has long been revered as a classic among jazz connoisseurs; Julius Hemphill's relatively obscure but highly influential debut is widely considered the missing link between the avant-garde and populist forms such as blues, funk and soul. The 1972 recording session for this historic masterpiece originally produced four unique compositions, but Hemphill only issued three on his Mbari Records imprint due to time constraints. Long out of print, this limited edition the original four tracks for the very first time, packaged in a deluxe mini-replica of the Arista/Freedom jacket.

Hemphill, like many of his peers in the aftermath of the 1960s, attempted to reconcile the aesthetic differences between the innovations of the New Thing and the proverbial "music of the people." Critical success was often fleeting for most jazz musicians in this regard, especially those operating in the then nascent fusion scene. This spartan date bears the distinction of being one of the first records to capture an artist of Hemphill's caliber successfully transposing the emotional candor of popular African-American musical traditions—from the sacred to the secular—into the rarefied language of free jazz, without compromising the unique characteristics of either idiom.

This remarkable performance is now available ( on a two-disc vinyl album mastered by the legendary Doug Sax. Each of the four performances appears on one side of the two-disc set. This is the ultimate fidelity for an ultimate performance.