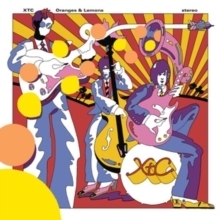 The album has been mastered by Jason Mitchell at Loud Mastering with input from Andy Partridge & is fully approved by XTC. The album is one of the most requested vinyl reissues as it was only on vinyl for a short period towards the end of the first vinyl era and was, as a result, never available as a decent quality pressing and poorly presented in a single sleeve. The sleeve has been re-worked to present the front colour image in all its psychedelic glory - and expanded to a gatefold to accommodate both the weight of the vinyl & the inclusion of song lyrics

. BRRRAAANNNNGG!! As brash, bright & vibrant as its Alan Aldridge influenced, pop art, outer cover art, Oranges & Lemons, XTC's ninth studio album, issued in February 1989, arrived like a burst of audio summer at the end of winter. Eloquently answering the question: 'How do you follow-up a classic album?' with the most obvious answer 'with another great recording', the album consolidated XTC's position especially in America as one of the era's finest recording outfits.

Following the slow burn success of Skylarking, which by then had become the band's biggest selling album to date, Virgin suggested the band should consider another American producer. XTC settled on session musician Paul Fox who