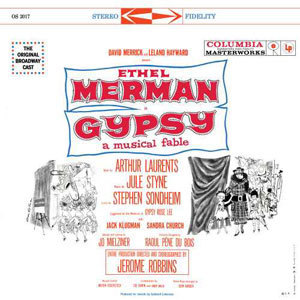 Analog Spark - AS00026 - Mastered by Ryan Smith at Sterling Sound

Reissued for the first time on vinyl since it's original release!

With a percussive score by Jule Styne, and solidly crafted lyrics by Stephen Sondheim, Gypsy stands out arguably as one of the two most perfect musicals ever created (the other one being Guys And Dolls). Over the years, it has been revived frequently, but Ethel Merman’s larger-than-life portrayal remains the standard by which all others have to measure up. This was the first stereo recording of Merman, produced by legendary Broadway cast recording producer Goddard Lieberson and recorded at Columbia 30th Street Studios.

This tribute to burlesque was a star vehicle for Ethel Merman. The score by Jule Styne and Stephen Sondheim includes the Merman standard "Everything's Coming Up Roses," and the song that is invariably used to introduce anything having to do with the strip tease, "Let Me Entertain You"...the show was considered the definitive Merman performance and the crowning achievement of her long career. (It marked her final appearance in a new Broadway musical, though she later appeared in revivals.) It is also considered one of the great American musicals of all time, balanced between the broad show business entertainment represented by composer Jule Styne and the modern, dark, psychological drama typical of Stephen Sondheim, who, as with his previous effort, West Side Story, was contributing only lyrics, though he would go on to write music and lyrics for a series of musicals from the 1960s on.

This is the first vinyl reissue of this album cut from the original stereo master tapes by Ryan K. Smith at Sterling Sound and pressed and plated at RTI. 180-gram vinyl housed in a Stoughton old style “tip-on” jacket.

2. Let Me Entertain You

5. Baby June and Her Newsboys

8. You'll Never Get Away From Me

9. Dainty June and Her Farmboys

1. If Momma Was Married

4. Together Wherever We Go

5. You Gotta Have a Gimmick

6. Let Me Entertain You 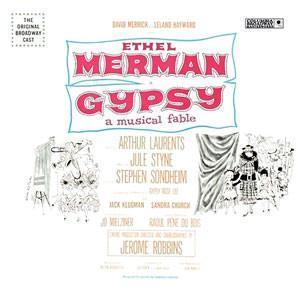