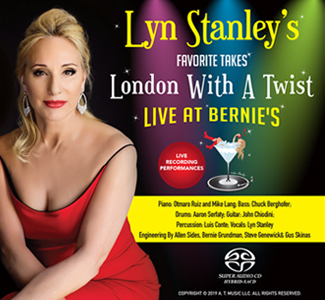 "Lyn Stanley, named Female Jazz Vocalist of the Year for 2018 by radio programmer Saul Levine of KKJZ-88.1 FM, was at the [2019 California Audio] show talking to people about her appreciation for the audiophile community and playing cuts from her new Direct-to-Disc album, London With A Twist: Live At Bernie’s. I've spent some time with this album, and I think it's her best yet. This is simply fantastic music and not just fantastic audiophile music. By the way, if the LP is too rich for your blood, the hybrid SACD also sounds great." - www.theaudiobeatnik

Lyn Stanley has been awarded Female Jazz Vocalist of The Year 2018 from one of the most visible public radio stations in the USA, KKJz-Los Angeles who have the highest Nielsen ratings for jazz radio audiences in the U.S. Mr. Levine notes that Ms. Stanley's recordings "are a revival of some of the greatest hits ever produced for Broadway Shows and Hollywood movies. They are chestnuts deserving to be reintroduced to the America public. The great American Songbook lives again with the added benefit of 'State Of The Art' recording techniques thanks to Lyn Stanley."

The SACD has the favorite track takes from the Direct-To-Disc Sessions January 19 & 20, 2019 at Bernie Grundman Mastering Studio. Includes 24 DSD tracks. First 12 are a Needle Drop of the test pressings. Tracks 13-24 are the same songs from the reel to reel analog tape of the actual recording session.

This 12 song Super Audio Hybrid CD (SACD) has the same 12 tracks that are on the Direct-To-Disc version of the same album title. The disc has a 16 44000 redbook layer that will play on most CD players (car or otherwise) and also a single DSD layer for those who have a Blu-Ray or DSD player. Limited pressing non-numbered.

While both Lyn and London could be described as sultry and sophisticated singers, the album is an appreciation, not an imitation of London’s material selections. Stanley puts her own distinctive stamp on the material London performed and has decided to include some of Julie London’s husband’s works as well as pop songs that set a lively pace to a live album. Songs include: Route 66, written by Julie London’s second husband, Bobby Troup, Let There Be Love, Body and Soul, Pink Cadillac, You Never Can Tell, Lover Man, Bye Bye Blackbird and many more.

In addition to acclaim for her velvety alto, choice of material, and her unique and personal approach to songs, Stanley’s attention to detail in the studio has garnered raves. This recording utilizes the best possible lathe in Los Angeles, tracked at Bernie Grundman Mastering studio in Hollywood. The ever so fastidious mastering guru, Bernie Grundman, commandeered the coveted Grundman studio lathe. In addition, Bernie’s long time associate and fellow audiophile, world famous multi-Grammy winning engineer, Allen Sides ensured the highest quality sound and mixing. Allen has engineered over 1,000 records with major studio artists selling over one billion records, including Joni Mitchell's Both Sides Now. Allen was also supported by Capitol Studios top engineer, Steve Genewick.

While speaking of the album Lyn says “You have to be into the musical moment. There’s pressure on everyone—me, the musicians—we have to be totally prepared. But it’s a great format if we execute it well.” I plan to let the real experience of a “live” recording happen, even the countdowns, so my fans can feel like they are live with us in the studio “lounge.”

• This Hybrid SACD contains a 'Red Book' Stereo CD Layer which is playable on most conventional CD Players!