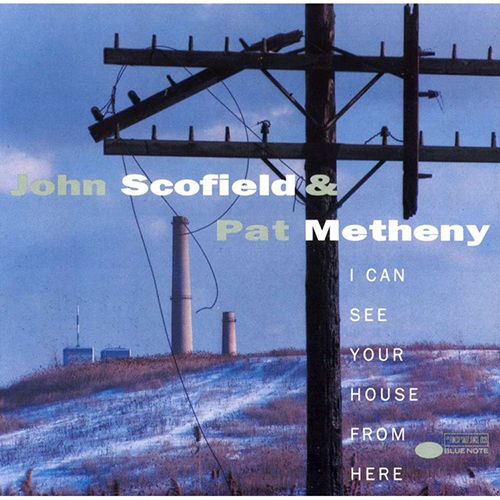 The mastering and pressing are beyond reproach, and in my experience are easily among the best within the whole series—especially factoring in how much improved this version is compared to the original CD. Despite its higher price tag, its more modern approach to jazz,, it wouldn’t be too far-fetched to say that when this series runs its course (not anytime soon!) this could be at the top of the series’ many sonic gems. Add a gorgeous Stoughton gatefold jacket, and a flawless RTI pressing and you have a wonderful reissue that’s a fresh, modern, sonic-thrill ride outside the familiar 50’s and 60’s jazz vault. well worth exploring. Sound 10/10 Analogueplanet

Scofield and Metheny. What more needs to be said? A masterpiece meeting of musical minds, these two guitar virtuosos entered the studio in December 1993 with Steve Swallow on bass guitar and Bill Stewart on drums to create one of the greatest jazz guitar albums of all time. Produced by Lee Townsend, I Can See Your House From Here is an 11-track set of Scofield and Metheny originals including Sco's expansive title track and Pat's rocking "The Red One" and the stunning ballad "Message To My Friend."

The Blue Note Tone Poet Series was born out of Blue Note President Don Was's admiration for the exceptional audiophile Blue Note LP reissues presented by Music Matters. Was brought Joe Harley (from Music Matters), a.k.a. the "Tone Poet," on board to curate and supervise a series of reissues from the Blue Note family of labels.