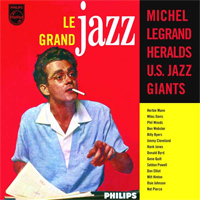 Michel Legrand, just 26 years old in 1958, already had a number of distinguished trophies on his shelves, among them the "Grand Prix du Disque", and could thus entice New York's top musicians into the recording studio. Three large ensembles with stars ranging from Miles Davis, John Coltrane, Ben Webster, Phil Woods and Bill Evans performed his new arrangements of famous numbers from the annals of jazz history.

Michel Legrand breathed a touch of film music into zany Fats Waller's "The Jitterbug Waltz", the serious Modern Jazz Quartet's "Django", Bix Beiderbecke's legendary "In A Mist" and Earl Fatha Hines's portrait of "Rosetta". The fresh arrangements cast a new light on the old evergreens, and the solos are absolutely top class - the new arrangements seem to have been tailor-made for Miles Davis and Ben Webster. This record is experimental, that is, it should be considered as such, since no more daring and flashing musical ideas have been brought forward by the eminent young French conductor/composer/arranger Michel Legrand, who is particularly responsible for the magnificent tracks of this longplayer.

The music featured on these tracks stays well within the bounds of jazz; in fact, the indefinable spirit of jazz is always there. Even though these recordings have slumbered in the archives for many, many years, they are not the least lethargic!