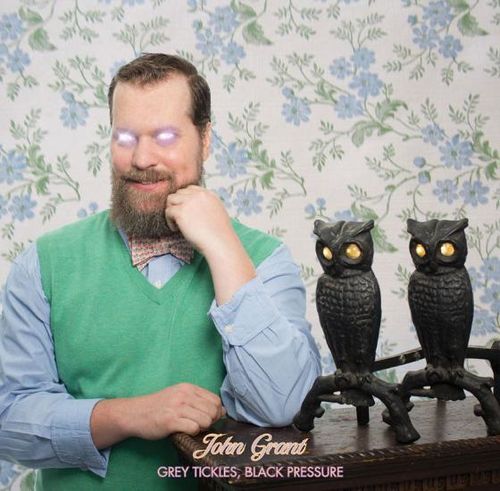 In its 58 minutes length, Grey Tickles, Black Pressure notches up fourteen masterful tracks with no down-swing, enchanting the listener until the very last words, "love never fails". So far, neither John Grant ever had.

John Grant's third album, the invitingly titled Grey Tickles, Black Pressure, is a veritable tour-de-force that further refines and entwines his two principal strands of musical DNA, the sumptuous tempered ballad and the taut, fizzing electronic pop song. There are newer musical accomplishments across its panoply of towering sound, like the title track's new steely demeanour, while the ominous drama of "Black Blizzard" echoes both John Carpenter and Bernard 'Black Devil Disco Club' Fevre's beautiful and icy synthscapes. The contagious, gleeful "You And Him" marries buzzing rock with a squelchy electronic undertow, while orchestral drama swathes the bad-dreamy "Global Warming" and the album's gorgeously aching widescreen finale "Geraldine".

Grey Tickles, Black Pressure was recorded in Dallas with producer John Congleton (St Vincent, Franz Ferdinand, Swans) - coincidentally the same state of Texas where Grant nailed his 2010 solo debut Queen Of Denmark in the company of Denton's wondrous Midlake. After that landmark return, which MOJO made its album of 2010, 2013's Pale Green Ghosts was made in Icelandic capital Reykjavik (where Grant has lived ever since), which entered the UK Top 20 in its first week and ended up as Rough Trade Shop's Album of the Year 2013, The Guardian's No.2 and in MOJO and Uncut's Top Five). Such recognition, iced by years of sell-out shows across Europe and a recent US tour as special invited guest of the Pixies, should allow the notoriously self-critical and insecure Grant the passing thought that Grey Tickles, Black Pressure will deservedly cement his reputation as the most disarmingly honest, caustic, profound and funny diarist of the human condition in the persistently testing, even tragic, era that is the 21st century.