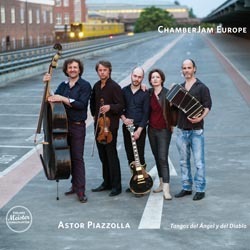 Astor Piazzolla: Tangos del Ángel y del Diablo - ChamberJam Europe
Natacha Kudritskaya (p); Marcelo Nisiman (bandeon); Daniel Rowland (v); Alberto Mesirca (g); Zoran Markovic (b)
Angels and Demons have always been an inspiration for narrators, writer, painters and musicians.
Astor Piazzolla composed the first "Tango del 'Angél" in the late 1950s. Early in the 1960s, more angel tangos followed - "L'Introducción al Angél" and "Muerte del Angél", which were now also written for the 'classic' quintet. Maybe this reflects Piazzollas spiritual life, which was more related to angels than demons during this period, although both existed in his real life.
During the 1960s, he wrote more angel and demon tangos, "Milonga del Angél" and "Resurrección del Angél", and the devil tangos "Tango del Angél', "Romance del Angél" und "Vayamos al Angél'".
Although not created as a whole conceptual work or suite, the strength of each piece shows within the connection - 'simple' tangos of a unique simplicity, but brilliant in their essence.
Tango is dance, tango is music, tango is art - an infinite love for art is what connects the performers of ChamberJam Europe and what is essential for each musician and his instrument.
I had the fortune to meet Astor Piazzolla in person. His idea about his music was to trascend time and frontiers. Everything is bound to transform. We are part of this journey with an hommage to angels and demons.
CHAMBERJAM EUROPE
ASTOR PIAZZOLLA: TANGOS DEL ÁNGEL Y DEL DIABLO
Natacha Kudritskaya piano
Marcelo Nisinman bandoneon
Daniel Rowland violin
Alberto Mesirca guitar
Zoran Markovic double-bass
Recording: June 2014 at Emil Berliner Studios, Studio 1, Berlin, by Stephan Flock
Production: Rainer Maillard & Stephan Flock
Production details
Recorded 2014-06-10
Released 2014-08-15
Executive & Recording Producers Rainer Maillard & Stephan Flock
Recording Engineer (Tonmeister) Stephan Flock
Assistant Engineers Douglas Ward & Rainer Maillard
Cutting Engineer Maarten de Boer
Piano Technician Thomas Hübsch
Lacquer Disc Developing Pallas GmbH
Recording and Mastering Facilities Emil Berliner Studios
Recording Location Emil Berliner Studios, Studio 1
Recording Equipment PolyGram Modul Mixer, Reverberation Chamber 1 & 3
Microphones Josephson C700S, Thuresson CM402, Neumann TLM 170 & GFM 132, Sennheiser MKH 20 & MKH 800
Lathe Neumann VMS 80
Cutting Head Neumann SX 74
Cutting Amp Ortofon Amp GO 741
Piano Steinway 360060
Direct-to-Disc
100% Disc
With a direct to disc recording, the music is recorded directly onto a lacquer disc.
The original carrier for manufacturing a vinyl record is the so-called lacquer disc. Direct-to-disc recordings use the lacquer disc as recording medium. Direct-to-disc productions are recordings, which are optimised for vinyl records.
100% Authentic
Genius is genius, mistake is mistake. There is only one chance. What has been played can be heard. What can be heard has been played.
A musician once compared direct-to-disc productions with walking a tightrope. He would perform differently if he knew that there was no chance to correct, cut or improve anything afterwards. It would be more honest and more conscious.
100% Analogue
From the microphone to the final vinyl disc, the audio signal stays analogue, without compromise.
Lacking a storage process on tape or as a coputer file, there are very short and direct signal routes. The instruments' sound waves are transformed into electrical oscillations by microphones, and cut into a groove on the lacquer disc by the cutting stylus directly and without any delay. Direct-to-disc recordings do without digitising the music, and also without a lossy storage on analogue tape.
100% Music
What you can hear on a direct-to-disc recording is the result of a long preparation and rehearsal time. It is not the result of subsequent manipulation and further changes of arrangement and recording.
With today's modern digital signal processing, mistakes are usually corrected in normal recordings. Why play perfectly, if it can be fixed in the computer afterwards anyway? This way of thinking leads to a very different recording process than recording direct-to-disc, as this possibility has been removed deliberately.
100% Originality
Direct-to-disc recordings are originals.
The recording is made onto a lacquer disc. With a galvanic process this lacquer disc is turned into an extrusion die. Every vinyl disc is thus an original copy of this recording. Because lacquer discs and extrusion dies are destroyed or worn out during the manufacturing and multiplication process, the pressed vinly discs are ultimately the best possible reproductions of a direct-to-disc recording.
100% Risk
Recording direct-to-disc is a very consequent way of producing a music recording. The production process and the use of technology is very different from conventional recordings. Everyone involved in a direct-to-disc recording must be able to rely completely on his colleagues' skills, as any mistake from the musicians, the recording team, the equipment or the galvanic process is audible or can lead to a cancellation of the whole production. Musicians and engineers report that in today's time, they perceive this as an enormous incentive and inspiration.