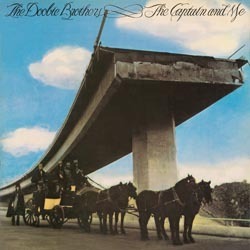 Speakers Corner 30 Years Pure Analogue  This LP is an Entirely Analogue Production
Speakers Corner Records has done a stellar job in re-mastering The Captain And Me to 180-gram vinyl. All of Ted Templeton’s rich production is captured with excellent stereo separation and precise mixing levels. Johnston’s voice has a balance of smooth and raw elements. There is a live energy to the recording that aptly showcases early Doobies. The hi-gloss gatefold is top-notch. Rock aficionados will really enjoy this vinyl release.-Sound 5/5 Audiophileaudition
The Doobie Brothers weren’t brothers, nor were they called Doobie. The band started life as Pud in 1969 in Chateau Liberté, a club in the mountains of California. The group took on the slang name for marihuana cigarettes (doobie) one year later. The Doobies’ music, however, never sounded like that of befuddled, half-stoned junkies. Heavy metal hard rock was their thing which made their record company Warner target the bikers of the rocker scene. The idea backfired, though, because the band had far more to offer than explosive hard rock.
The album "The Captain And Me" is considered to be the group’s most concentrated and versatile production since it contrasts aggressive, hard numbers with gentle ones full of melodiousness. The very first number, "Natural Thing", shows how winsome vocal folk music and electric guitar riffs can be amalgamated into rock music. Amongst these titles, decidedly angry numbers such as "Without You" and "Evil Woman" became real trailblazers. Now and then, an extensive harp solo or nonchalant licks from the acoustic guitar remind one of the pungent bluegrass style emanating from the South. That even the sweet wailing of the steel guitar ("South City Midnight Lady") finds room for expression seems quite logical in this well-thought-out musical concept.
Taking off on the commercial success of Toulouse Street, the Doobie Brothers’ The Captain and Me propelled the group to superstar status. Having spent an entire year on the charts after its March 1973 release, the band’s third record features one classic tune after another, including the mega-hits “China Grove” and “Long Train Runnin’.”
To many, The Captain and Me remains the feel-good California quintet’s best work. Balanced between Tom Johnston’s harder-rocking contributions and Patrick Simmons’ mellower country-laced ballads, the album satisfies all tastes and displays a stunning array of high harmonies and interlocking rhythms.
You have never heard the familiar chorus of “China Grove” or romance of “South City Midnight Lady” with such clarity, soul, or immediacy
The Doobie Brothers' third long-player was the charm, their most substantial and consistent album to date, and one that rode the charts for a year. It was also a study in contrasts, Tom Johnston's harder-edged, bolder rocking numbers balanced by Patrick Simmons' more laid-back country-rock ballad style. The leadoff track, Johnston's "Natural Thing," melded the two, opening with interlocking guitars and showcasing the band's exquisite soaring harmonies around a beautiful melody, all wrapped up in a midtempo beat -- the result was somewhere midway between Allman Brothers-style virtuosity and Eagles/Crosby & Nash-type lyricism, which defined this period in the Doobies' history and gave them a well-deserved lock on the top of the charts. Next up was the punchy, catchy "Long Train Runnin'," a piece they'd been playing for years as an instrumental -- a reluctant Johnston was persuaded by producer Ted Templeman to write lyrics to it and record the song, and the resulting track became the group's next hit. The slashing, fast-tempo "China Grove" and "Without You" represented the harder side of the Doobies' sound, and were juxtaposed with Simmons' romantic country-rock ballads "Clear as the Driven Snow," and "South City Midnight Lady." Simmons also showed off his louder side with "Evil Woman," while Johnston showed his more reflective side with "Dark Eyed Cajun Woman," "Ukiah" and "The Captain and Me" -- the latter, a soaring rocker clocking in at nearly five minutes, features radiant guitars and harmonies, soaring ever higher and faster to a triumphant finish.
. This is 70s rock at its best!
The Captain And Me" - Tom Johnston ; Patrick Simmons ; John Hartman ; Tiran Porter ; Michael Hossack .
1. Natural Thing
2. Long Train Runnin'
3. China Grove
4. Dark Eyed Cajun Woman
5. Clear as the Driven Snow
6. Without You
7. South City Midnight Lady
8. Evil Woman
9. Busted Down Around O'Connelly Corners
10. Ukiah
11. Captain and Me