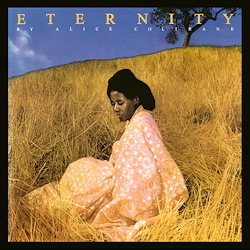 Speakers Corner Records has released a re-mastered 180-gram vinyl of Alice Coltrane’s 1975 Warner Brothers album, Eternity. This is quintessential distillation of  modal and avant-jazz. This vinyl re-master of Eternity is excellent. The overall sound mix is centered and vibrant, especially the studio-affected organ. Sound 4.5/5 Audiophileaudition March 2022

When the brilliant saxophonist John Coltrane died in 1967, the core values of jazz music had long drawn him into the spiritual world ("A Love Supreme", "Ascension", "Meditations" etc.). His widow and final pianist followed in his footsteps. Alice Coltrane (1937–2007) sought after »cosmic sounds, higher dimensions, astral levels« – she had an important influence on the spiritualised, esoteric music scene of the 1970s. Her first album was only released after John Coltrane’s death, but "Eternity" was already her tenth. (In the same year she founded a Hindu Vedantic Center in California.)

The album draws its power from highly contrasted sound worlds. The size of the ensemble ranges from an unaccompanied harp solo ("Wisdom Eye") to a large orchestra with a big band of up to 25 plus a 12-man string section. Alice Coltrane’s main instrument is the electric Wurlitzer organ, whose rasping sound conjures up John Coltrane’s saxophone (especially in the opening number "Spiritual Eternal"). Mostly she improvises modally, sinuously, or with meditative ecstasy – whether in the style of Latin rock ("Los Caballos") or quite without a firm tempo ("Morning Worship" with a tamboura accompaniment).

Support comes from such renowned musicians as Charlie Haden (bass), Jerome Richardson (saxophone and flute), Hubert Laws (flute) and Ernie Watts (cor anglais). In the number "Om Supreme" Coltrane switches to a gently swinging Fender Rhodes electric piano, which is joined by a six-voice vocal group. A surprising finale to the album is an orchestral adaptation of an excerpt from Stravinsky’s "Le Sacre du printemps". Here the moments of dissonance and free jazz are far from meditative contemplation.

Side A
1. Spiritual Eternal
2. Wisdom Eye
3. Los Caballos
Side B
1. Om Supreme
2. Morning Worship
3. Spring Rounds From Rite Of Spring 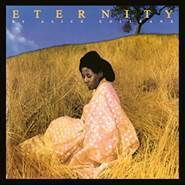 AAA 100% Analogue   This Speakers Corner LP was remastered using pure analogue components only, from the master tapes through to the cutting head 30 Years pure Analogue
MADE FROM THE ORIGINAL MASTER TAPES
AAA 100% ANALOGUE - PURE ANALOGUE AUDIOPHILE MASTERING
We use the Original Tapes and work with only the Best Mastering Studios Worldwide
180 GRAM VIRGIN VINYL  PLATED & PRESSED AT PALLAS GERMANY
Faithful Reproduction of the Original Artwork and Labels
LIMITED EDITION Released in Limited Quantities
All Licences and Mechanical Rights Paid