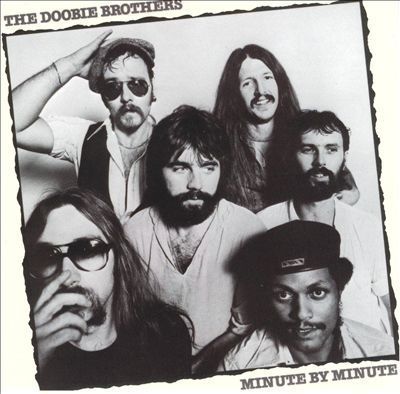 Just makes me want to chuck out all my mediocre major label re- issues.,  Why can’t all reissues sound like this    - LPreview

This 4X Grammy Award winning album from 1979 includes some of their biggest hits like "What A Fool Believes," "Minute By Minute" and "Dependin' On You."

The Doobie Brothers are an American institution. Founded in 1970 in the San Francisco Bay area, they continue to tour yearly, and release new music on a regular basis. .

With Tom Johnston gone from the lineup because of health problems, this is where the "new" Doobie Brothers really make their debut, with a richly soulful sound throughout and emphasis on horns and Michael McDonald's piano more than on Patrick Simmons' or Jeff Baxter's guitars. Not that they were absent entirely, or weren't sometimes right up front in the mix, as the rocking, slashing "Don't Stop to Watch the Wheels" and the bluegrass-influenced "Steamer Lane Breakdown" demonstrate. But given the keyboards, the funky rhythms, and McDonald's soaring tenor (showcased best on "What a Fool Believes"), it's almost difficult to believe that this is the hippie bar band that came out of California in 1970.

There's less virtuosity here than on the group's first half-dozen albums, but overall a more commercial sound steeped in white funk. It's still all pretty compelling even if its appeal couldn't be more different from the group's earlier work (i.e., The Captain and Me, etc.). The public loved it, buying something like three million copies, and the recording establishment gave Minute by Minute four Grammy Awards, propelling the group to its biggest success ever.

How the Doobie Brothers came to form a “family” is not only a fateful event but also a good story. While getting high on a marihuana joint (or doobie) that was passed from one to the other in a practice room, one of the group apparently uttered the following momentous words: »We are all Doobie brothers«. Later, when in possession of all his faculties, the co-founder of the group, Tom Johnston, was thinking along the lines of a Motown sound, with a bass line resembling that of Seals and Crofts, and vocals in the style of Stevie Wonder. That "Minute By Minute", the first album to appear in the post-Johnston era, so perfectly reflects the mature style of the group is mostly thanks to the two experienced former Steely Dan musicians Jeff “Skunk” Baxter and singer Michael McDonald.

Subtle, gently electrified groove epitomizes the main focus of this album. Its laid back, colourful and glittering sounds are rounded out with powerful rhythms and warm sounds ("What A Fool Believes"). Solo vocals are layered over rolling chords on the piano, a snappy bass and a multi-voiced background to create an appealing harmony ("Here To Love You"). Perfectly tempered and accomplished solos from the lead guitar and saxophone are welcome extras that never drown out the impressive leader of the group. So much brotherliness on a record certainly deserved to be recognized with three Platinum Records and a Grammy Award.

Selections:
1. Sweet Feelin'
2. Open Your Eyes
3. Dependin' On You
4. Here To Love You
5. Minute By Minute
6. You Never Change
7. What A Fool Believes
8. Steamer Lake Breakdown
9. How Do The Fools Survive
10. Don’t Stop To Watch The Wheels