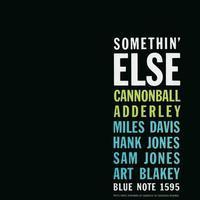 180g Vinyl LP! Mastered By Kevin Gray From Original Master Tapes!
Legendary trumpeter Miles Davis's unmistakable rasp at the end of "One for Daddy-O," makes it clear he wasn't just playing the role of sideman on Somethin' Else, the album by Cannonball Adderley. The depth of their musical camaraderie lifts this session up throughout, from the breathtaking performance of "Autumn Leaves" to the thrilling title track. Hank Jones/Sam Jones/Art Blakey round out the quintet.
This Blue Note Classic Vinyl Edition is all-analog, mastered by Kevin Gray from the original master tapes, and pressed on 180g vinyl at Optimal.
Blue Note is proud to present the Blue Note Classic Vinyl Reissue Series, a continuation of their acclaimed Blue Note 80 Vinyl Reissue Series which was launched in celebration of their 80th anniversary in 2019. The Classic Series will once again feature all-analog 180g vinyl pressings in standard packaging that are mastered by Kevin Gray directly from the original master tapes and manufactured at Optimal in Germany.
In a review of the BN80 Vinyl Edition of Dexter Gordon's Doin' Allright, Analog Planet wrote "this reissue is a success for Blue Note in terms of quality at a great price point, and I look forward to the rest of this excellent and affordable series." In selecting the BN80 Vinyl Edition of Herbie Hancock's Takin' Off as their Recording of the Month, Stereophile awarded the sonics of the pressing 4½ stars writing "The sound of this reissue is strong and articulate, with balance and clarity from all the instruments."
The first 16 titles of the Classic Series will focus on the enduring classics of the Blue Note catalog, kicking off on December 4 with the release of two masterpieces - pianist McCoy Tyner's The Real McCoy and trumpeter Lee Morgan's The Sidewinder - both of which are available for pre-order now. The Classic Series will be on-going, running alongside the Tone Poet Audiophile Vinyl Reissue Series which is produced by Joe Harley.
Blue Note Classic Vinyl Reissue Series
All-Analog Pressing
Mastered by Kevin Gray from original master tapes
Manufactured at Optimal in Germany
Musicians
Cannonball Adderley alto sax
Art Blakey drums
Miles Davis trumpet
Hank Jones piano
Sam Jones bass
Selections
Side A:
Autumn Leaves
Love For Sale
Side B:
Somethin' Else
One For Daddy-O
Dancing In The Dark