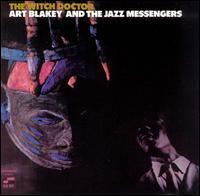 The Witch Doctor is an album by American jazz drummer and bandleader Art Blakey and his group The Jazz Messengers recorded on March 14, 1961 and released on the Blue Note label. It features performances by Blakey with Lee Morgan, Wayne Shorter, Bobby Timmons, and Jymie Merritt.