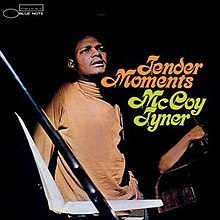 On his second Blue Note album Tender Moments, pianist and composer McCoy Tyner explored the colors and textures available in a nonet setting with some of the finest musicians of the time: Lee Morgan on trumpet, Julian Priester on trombone, Bennie Maupin on tenor saxophone, James Spaulding on alto saxophone and flute, Bob Northern on French horn, Howard Johnson on tuba, Herbie Lewis on bass, and Joe Chambers on drums. Highlights of the session include dedications to John Coltrane (“Mode to John”) and Thelonious Monk (“The High Priest”) as well as the stunning ballad “All My Yesterdays.”