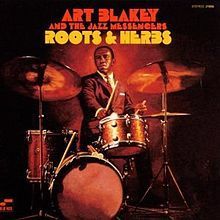 How is it that one of Art Blakey's greatest albums with the Jazz Messengers is so little known? The 1961 edition of the Messengers included Lee Morgan on trumpet, Wayne Shorter on tenor saxophone, Bobby Timmons on piano, and Jymie Merritt on bass. In February and May of 1961, this group (with pianist Walter Davis Jr sitting in on two tracks) entered Rudy Van Gelder's studio in New Jersey and proceeded to lay down Roots & Herbs, a brilliant set of six Shorter compositions including the driving hard bop of the title track, the playful "Ping Pong" and the clever "United". The album was eventually released in 1970 and deserves a place among Blakey's finest recordings.
Tone Poet Audiophile Vinyl Reissue Series:
"Tone Poet" Joe Harley - co-founder and co-producer of the acclaimed Music Matters audiophile vinyl series - is the producer of this new series of all-analog, mastered-from-the-original-master-tape 180g audiophile vinyl reissues in deluxe gatefold packaging. Mastering was done by Kevin Gray (Cohearent Audio) and vinyl was manufactured at Record Technology Incorporated (RTI). The titles were handpicked by Harley and cover lesser-known Blue Note classics, modern era standouts, and albums from other labels under the Blue Note catalog.
Extreme attention to detail has been paid to getting these right in every conceivable way, from the jacket graphics and printing quality to superior LP mastering (direct from the master tapes) by Kevin Gray to superb 180 gm audiophile LP pressings by Record Technology Inc. Every aspect of these Blue Note/Tone Poet releases is done to the highest possible standard. It means that you will never find a superior version. This is IT.
The so-called Tone Poet (Joe Harley) is confident that his audiophile reissues will allow 21st-century listeners to hear what the musicians heard as the master tape was played back on the studio monitors in Rudy Van Gelder's studio 50 or 60 years ago. He believes that, in terms of quality, Blue Note albums have never sounded or looked better. "Every aspect of these Blue Note releases is done to the highest possible standard," he says. "It means that you will never find a superior version."
Musicians
Lee Morgan trumpet
Wayne Shorter tenor saxophone
Bobby Timmons piano
Walter Davis Jr. piano ("Roots And Herbs", "United")
Jymie Merritt bass
Art Blakey drums
Side A:
Ping Pong
Roots And Herbs
The Back Sliders
Side B:
United
Look At The Birdie
Master Mind