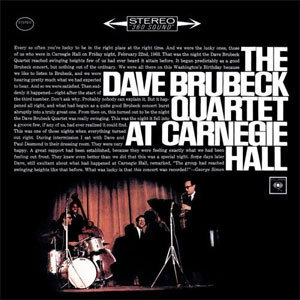 This is a great LP and I highly recommend it for the music, the performance, and the wonderful perspective of the live performance.- Dagogo Review

Dave Brubeck, designated a "Living Legend" by the Library of Congress, is one of the most popular musicians in both the jazz and classical worlds. With a career that spans over six decades, his experiments in odd time signatures, improvised counterpoint, polyrhythm and polytonality remain hallmarks of innovation.

Dave formed the Dave Brubeck Quartet with alto saxophonist Paul Desmond. The legendary Brubeck-Desmond collaboration lasted seventeen years and beyond. The Dave Brubeck quartet's recordings and concert  The quartet's audiences were not limited to students, however.

The group played in jazz clubs in every major city. They repeatedly won top honors in trade magazines and critic's and reader's polls. At Carnegie Hall was recorded at the famed Carnegie Hall in New York City on February 21, 1963. It was described by critic Richard Palmer as "arguably Dave Brubeck's greatest concert" and a "truly majestic record that should be in every serious collection"; for Don Mather it is "one of the all time great live jazz performances." Ironically, original expectations for the concert were low.

Not only was drummer Joe Morello recovering from a case of the flu at the time, but New York had been suffering from a newspaper strike, and the group was worried that the attendance would be sparse. The worries were groundless: the hall was full; the group, whose long history together (the newest member, bassist Wright, had joined four years earlier) had by then made them extraordinarily close-knit, turned in an exciting, sparkling performance. It featured a remarkable level of co-ordination among the members of the group, at the same time as they display a relaxed yet powerful virtuosity.

"The band moves through all their hits and their new instincts gained  ther standards such as 'Pennies From Heaven,' were literally harmonically reinvented by the intense counterpoint, double and even triple that went on between Desmond and Brubeck.

And that's what this set is a reflection of: the Brubeck band would have loved to be recorded live every night they played.

. While Take Five is rightfully a classic in that it changed everything, At Carnegie Hall reveals the band at the epitome of its musical -- harmonic, rhythmic, melodic, improvisational -- strength with near telepathic communication. It swings like a mother and offers an entirely new dimension to the definition of 'melodic improvisation.'"

How fortunate that the twelve brilliantly improvised numbers are now available once again on vinyl, having been recorded live at the legendary Carnegie Hall 60 years ago.

Comparing this Speakers Corner reissue to an original black "360 Sound" 1A pressing favors the original, of course, which is more open and extended on top and allows the reverberant field to more fully flow and express itself. The Speakers Corner reissue is somewhat darker and veiled by comparison but without the original to compare it to, it's decent and very "analogue-y" sounding. And of course the Pallas pressing quality is superb. My used original gets "crunchy" in spots. - Michael Fremmer Stereophile 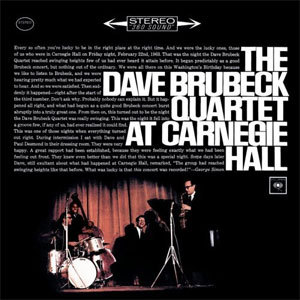