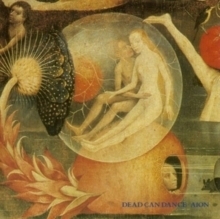 With the industrial textures of their eponymous debut behind them, the fifth album from Dead Can Dance (Aion, released in 1990) is perhaps the most focused and concise of their albums. Predominately recorded at their own studio in Southern Ireland, it features guest vocals from soprano David Navarro Sust. His vocals add to Brendan and Lisa’s opposing yet complimentary styles. The Middle Ages and the early Renaissance are a core influence for Aion; an atmosphere only amplified by the album’s cover, a section from the Earth phase of Dutch painter Hieronymus Bosch’s famed triptych, The Garden of Earthly Delights.

Formed in Australia in the early 80s by Lisa Gerrard and Brendan Perry, Dead Can Dance had veered away from the punk explosion towards a more non-conformist style. But finding the music scene unreceptive they moved to London, landed a record deal with 4AD and embarked on a career with the label that would last seventeen years.

Highly respected artists with a loyal global fanbase, Gerrard and Perry consistently made music full of integrity and passion. Both immensely talented vocalists - Gerrard with her inimitable, mesmeric style and Perry’s haunting baritone - they were also gifted, instinctive musicians and their melding of traditional instruments with samplers created a bridge between ancient and modern music.