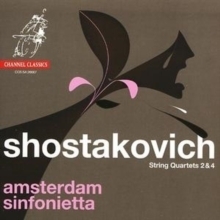 Curious that the Second is among the last of the quartets to be given orchestral treatment, as its symphonic weight and expressive range make it the most suitable in any case. The Amsterdam... — Gramophone Magazine,

The arrangements for string orchestra of these two quartets are not, for once, the work of Rudolf Barshai but that of Marijn van Prooijen, a double bass player with the Amsterdam Sinfonietta. Prooijen has provided a bass part that aptly matches the symphonic proportions of these works while still managing to retain their chamber music intimacy and origins. The Amsterdam Sinfonietta is not a large chamber orchestra, having a 6/6/4/4/2 line up with some changes of personnel between these sessions. Quartet No.4 is presented first on this disc and was taped in August 2006 while No.2 stems from February 2007.

Quartet No.4, a work of sombre melodic beauty and perfect proportions, is played here with a beguiling simplicity and yet manages to convey to the listener an intensity of purpose throughout each of its four movements. The performers are meticulous in their observation of Shostakovich’s many dynamic and tempo changes in this quartet and wonderfully convey the overt Jewish character in the two final Allegrettos.

Although Quartet No 2 was written in 1944, it inhabits a very different world from that of Symphonies 7 and 8, which were composed at about the same time. It took Shostakovich just nineteen days to write, and both the scale of its conception and its length (nearly 40minutes) make it particularly suitable to be heard in the guise of a chamber symphony.
The exhilarating opening, marked – Overture (Moderato con moto) at once illustrates the superb unanimity and attack of the Amsterdam Sinfonietta while, in the Recitative and Romance that follows, the soaring lines of Candida Thompson’s solo violin, over a soft and sustained string background, has an aching beauty that makes a deep and lasting impression. This is surely one of the most haunting movements Shostakovich ever penned.
Although the string playing throughout this disc has an appealing sweetness, the players are equally adept at conveying the music’s bitter irony in the ‘Valse’ and both the build up of tension and excitement in the extended ‘Theme and Variations’ of the finale.

Jared Sacks has consistently produced many fine recordings in DSD for his Channel Classics label, but this one is especially noteworthy. The acoustic of the two locations and the refined playing of the Amsterdam Sinfonietta have melded perfectly to yield a recording of superlative clarity and luminous tonal allure. The sound has both richness and solidity making it one of the finest recordings of a string orchestra that I have had the pleasure to hear.

This SACD deserves a top recommendation on all counts.