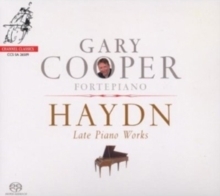 whether in 5.0 surround or stereo, captures all the subtle timbres and voices of the fortepiano with full fidelity, including the damping of the resonances when the pedal comes off, and the wonderful soft veiled tone when the mute pedal is applied. There is otherwise little action noise, and the surrounds add a subtle enveloping bloom to the sound, so that the listening experience is suitably intimate. One is astonished that the recording was made in the full acoustic of Doopsgezinde Kerk, Deventer, Holland. Presentation is well up to the usual Channel standards - Sound 5/5 HRaudio

The inspiration for this recording was derived from that all-too-rare occurrence: a perfect marriage of instrument and composer's music. The language of Haydn's later keyboard writing, containing such infinitesimal subtlety of expression, inflection, dynamic range, colour, and every mood under the sun, from tempest to sunny wit, seems to me perfectly matched by the gem of a piano used for this recording,dating from Vienna c.1785. In truth, I have never encountered an instrument capable of such breadth of touch and response from this period: to my mind, Haydn's last, and greatest, keyboard works, richly deserve being heard on such a piano, in order that the fullest range of expression and depth of imagination contained in these remarkable pieces may be brought alive.