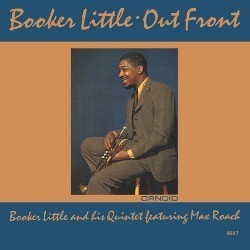 Featured in Michael Fremer's Heavy Rotation in the November Sound 8/10 Music 8/10  Stereophile!
The brilliant young post-bop trumpeter Booker Little is heard here accompanied by an all-star band, including the saxophonist Eric Dolphy, the bassist Ron Carter and the drummer Max Roach, on a set that combines elements of bop and cool jazz, as well as Little's own imaginative flourishes, which display an authority and potential far beyond his mere 23 years.
I can’t get enough of these Candid reissues from Pure Pleasure. The original label was short-lived and the distribution limited. Candid was originally a subsidiary of Archie Bleyer’s Cadence Records (Bleyer had an unlikely ‘50’s hit single with “Hernando’s Hideaway” from the Broadway hit “Damn Yankees” and scored big with The Everly Brothers). The label was sold to pop crooner Andy Williams, a seemingly unlikely customer, who reissued some of both Cadence and Candid titles on his label Barnaby, distributed by Columbia Records.
In the 1980s, the label was purchased by British record producer Alan Bates, which is why when Pure Pleasure says these reissues are mastered from the original tapes, you can believe it. Listening to the astonishing sound will do the trick as well.
Producer/A&R man Nat Hentoff used Nola Penthouse studio and engineer Bob d’Orleans almost exclusively and got sonic results to match or beat anything done during that golden age by anyone, especially in terms of musical intimacy and harmonic integrity. These Candid recordings are uniformly superb sonically. Musically, they are varied and sometimes politically charged as A&R man Hentoff was an activist, particulary where civil rights were concerned.
This gem led by the soulful young trumpeter Booker Little, who died six months after it was recorded at the age of 23, also features Eric Dolphy on alto sax, bass clarinet and flute and Julien Priester on trombone. The rhythm section features his mentor Max Roach, pianist Don Friedman, and alternating on bass, Art Davis and Ron Carter. Out Front is considered by most observers to be his best session. No doubt it was his best recorded and that’s important because Little’s gorgeous tone deserves to be heard whole.
Little’s compositional strength is evident throughout. This was no jam session, though Little left plenty of room for the soloists (including himself, of course) to express themselves. Roach’s work on the opening track “We Speak,” is worth the price of admission all by itself but there are so many more outstanding solo turns on this moody, introspective set, especially on side one’s closer “Quiet Please,” where Dolphy, Priester and Friedman each make short, memorable statements before Little joins in and wraps up the tune.
Sonically, Out Front exemplifies the Nola Penthouse sound and engineer d’Orleans’s clean, intimate approach. Little’s trumpet is front and center three dimensionally and while Roach is way off to the left and Friedman a bit more hard right than you might like, the overall picture is credible and orderly, allowing each musician’s expression to stand out, while subsumed within the whole.
A superb, worthwhile reissue that’s easy to recommend for both music and sound. - Michael Fremmer Sterephile
Musicians:
Booker Little, trumpet
Eric Dolphy, alto, bass clarinet, flute
Julian Priester, trombone
Max Roach, drums, tympani, vibes
Art Davis, Ron Carter, bass
Don Friedman, piano
Selections:
1. We Speak
2. Strength And Sanity
3. Quiet, Please
4. Moods In Free Time
5. Man Of Words
6. Hazy Hues
7. A New Day