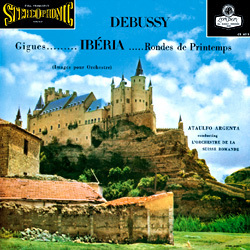 Speakers Corner  25 Years pure Analogue
This set of pieces is called Images Pour Orchestre to differentiate it from two previous sets of Images each consisting of three pianoforte pieces. The orchestral Images were begun in 1906 and finished in 1912. In Gigues, the sound of an oboe d'amore is heard here. In this movement it is first used for the solo tune in slightly quicker time after the short introduction. Iberia contains three main parts: Par les rues et par les chemins; Les parfums de la nuit; and Le matin d'un jour de fete. The last movement, Rondes de Printemps, takes the music once more into the visionary domain of poetry.
Debussy explains these Images: "I am attempting something . . . that might be called reality, but what idiots call Impressionism, a term that is completely misapplied . . . " Throughout the whole set of these orchestral Images Debussey's sensitive apprehension of qualities of tone is apparent. The ear of one of the most refined connoisseurs of sound in his generation is at work. The effect is wonderfully clear, stimulating and moving.
Vinyl lovers like those from Speakers Corner can lament about how difficult it can be to dig up audio treasures and enhance them to make them fresh and new. A good mastertape and precise cutting is of prime importance, of course. But a collector's heart will also miss a beat when taking a look at the original cover. Record dealers know this only too well and demand a high price for rare original recordings, as though they were dealing in gold. The rarer the recording, the more expensive it comes. In order to close the gap between the demand for coveted LPs and the potential for speculation with such productions, Speakers corner are re-releasing a number of first-class recordings by Mercury and Decca. All the titles appeared in their catalog but were sold out years ago.
Gigues, Ibéria and Rondes de Printemps - Orchestre de la Suisse Romande conducted by Ataúlfo Argenta.
And the blind shall see - promising words indeed! And very apt to describe the impressionist tonal paintings of Claude Debussy, who exchanged the paintbrush for a pen and the canvas for manuscript paper. Debussy's musical tools were not so much the etching-needle or sharp pencil but rather more a rich variety of glorious paints on his palette and thick brushes and sponges to form flowing figures and shapes on his musical canvas. With the Images pour Orchestre, the art lover possesses three of the mature composer's most important musical paintings to hang in his gallery. Thanks to its rhythmic and melodic structure, Iberia is very probably the most striking of these three studies. The impressionistic, frazzled theme is lent substance through the familiar sounds and rhythms of Spanish folk music; Debussy conjures up the moods and impressions of a landscape which he himself hardly knew. And should the listener not be in a position to wander the streets and pathways, to breathe the perfume of the night, nor to enjoy a fiesta morning, then this record will certainly enable him to see all this for himself.
Selections: Images pour Orchestre Gigues, Ibéria and Rondes de Printemps.
Musicians:
L'Orchestre De La Suisse Romande
Ataulfo Argenta, conductor
Selections:
Claude Debussy (1862-1918)
Images Pour Orchestre
1. Gigues
2. Ibéria
a. Par les rues et par les chemins
b. Les parfums de la nuit
c. Le matin d'un jour de fete
3. Rondes de Printemps 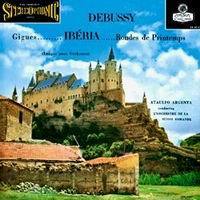