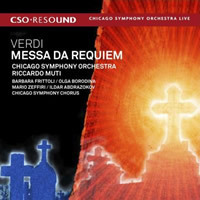 Verdi’s Requiem is a work of undeniably epic proportions, but more often than not (and thanks to the ubiquity of the Dies Irae in television and film) the public hear only snippets of it. Consequently, audiences can see it as something of a marathon rather than the evolving, narrative-heavy work that it is. It is the job of the orchestra as much as the conductor and singers to ensure that no-one nods off inside half an hour, so Riccardo Muti and the Chicago Symphony and Chorus have a huge of gallery of previous recordings to live up to if they’re to succeed.

First things first, though: the work’s most famous moment. Such is the notoriety of the Dies Irae from early on in the Requiem that recordings of it tend to compete in ferocity and aggression alone. True enough, it is supposed to be a musical evocation of the world’s destruction, but to simply hammer through it is to miss the intricacies. The CSO under Muti’s baton make an initially brash fist of it, but there is sensitivity to follow that makes it worthwhile. It’s perhaps not so demented and bullish as, say, 2009’s Antonio Pappano recording of the movement, but that’s to its credit. When the storm passes and we are left with the menacing whispers of the chorus it suddenly seems worth the heaviness – the solo voices are blended perfectly in timbre and volume.

To contrast the worminess of the end of the Dies Irae, the following Tuba Mirum is splendidly full-blooded, even masculine, and exactly what’s needed. As the second half of the work arrives, the textural colours increase in variety and the differing moods jump around even more skittishly. The Offertorio section has some excellently judged vocal exchanges, reverberant and most effective when building towards a zenith (there are many, thankfully). Restrained, potent and almost trance-inducing at times, it’s as far away from the Dies Irae as we could possibly be.

Of course, the Dies Irae returns for its death rattle before the conclusion, and it’s possibly even more wonderfully damned and destructive than the first iteration. Muti and company do plenty with the rich material here, and succeed in making the Requiem a thoroughly entertaining work as well as a deeply artistic one. Many shades make for a varied performance, one that tackles the work confidently and with vim to spare.

Many listeners who have held reservations about Harnoncourt's approach to this work (see Verdi: Requiem - Harnoncourt), will be relieved to find that this account has bigger voiced soloists, a bigger chorus and a very "operatic" take to this stunning music. Like Harnoncourt, Muti requires 2 discs (and comes in at 89:38 compared to 87:43) but this hides what is really happening in Muti's reading: speeds are exaggerated in both directions compared to Harnoncourt to heighten the emotional effect of this already potent score.

The soloists are on good form although it must be said that their sound is somewhat fruity and tremulous after Harnoncourt's very "pure" sounding team. There is nothing wrong with some vibrato and the unanimity of its speed and size between the quartet is a thing of wonder in itself although some may well find that the overall variance of pitch a little wide in the performing climate of today but it is usually easy to identify the notes around which the soloists are centring their pitch. Of any in the team, the tenor Mario Zeffiri comes closest to wobbling away to another key - especially when under strain but Barbara Frittoli also sails close to wind on occasion. In the booklet, stress is made that all are favourites of Muti's - this maybe true but I think a better team could have been found.

The chorus is altogether more powerful than the Arnold Schoenberg Chor and better balanced between each section, as the constituent elements of the chords and moving parts are far more easily identifiable. The orchestra are naturally, a little less prominent due to others coming more to the fore. That said, they are (on the basis of this disc) easily the equal, if not superior, of Harnoncourt's VPO. A shame that the soloists couldn't match the refinement of the chorus' singing under pressure.

Muti's direction is, as one might expect, little short of inspired - indeed it was his earlier performance from La Scala that ignited my interest in Verdi - the emotions are not hidden away behind a cloak but celebrated openly in a way that is becoming increasingly unusual in Western society as a whole; as such it is wonderfully refreshing but a hard listen. Indeed, the end of the Dies Irae is almost too much to bear with its frequent lamentations underpinned by "angelic" string writing and playing. Like Harnoncourt, Muti is using the recently published new edition of the score and whilst the parts used may have the (subtle) corrections made, one is left with the distinct impression that Muti has not significantly re-evaluated his vision of this work nor how the artists should perform this music - an aspect that will attract some as much it repels others!

The sound is also very good, with the extra trumpet fanfares being placed in front of the listener. One must commend the audience as well for not revealing their participation, especially during the many, rapt pianissimo passages. Likewise, there is none of the characteristic congestion that plagues concert recordings made in the Musikverein of mid/late Romantic music onwards. For all the clarity though, no sense of warmth has been lost nor is it overly analytical sound - it just "is".

Recommended with slight reservations about the vocal quartet, for the CSO and chorus react like they are possessed under Muti's inspired direction.