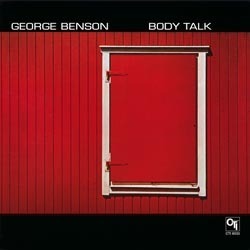 Speakers Corner 25 Years Pure Analogue  This LP is an Entirely Analogue Production
But it’s Benson’s sequence of albums for Creed Taylor Incorporated which arguably represent the cream of his work, and are indisputably the purest in terms of jazz. They are also all consistently and beautifully engineered — by Rudy Van Gelder at his Englewood Cliffs, New Jersey studios. This superb sonic quality was a feature which at the time was all too often obscured by flimsy vinyl and poor manufacture. This makes the outstanding new release from Speakers Corner, beautifully pressed on 180g vinyl, all the more valuable. Body Talk has never sounded better. (Well, maybe on the master tapes.) - Londonjazz
All of Gelder’s recordings have an upfront and in your face mixing style and it enhances the body of work Benson brought to this LP. Every tone is so rich and the reissue of this title is a very welcomed addition to the canon of titles finding their way into the world again. This is a five star record that shouldn’t go missed by anyone. The definitive modern jazz guitarist, whose bluesy, soulful grit and gospel-tinged singing made him a commercial and critical success. - SCV
With an eye and ear on what was happening on the soul charts -- James Brown in particular -- Benson made a decided swerve toward R&B on this release. Indeed the JB's Pee Wee Ellis turns up as a big band arranger on three tracks, and he no doubt had a direct influence on the distinct JB groove of one of the non-big-band tunes, "Dance." It should come as no surprise by now that this formidable guitarist has no problem handling any kind of groove, although the mixed rhythm section of Jack DeJohnette, Ron Carter, electric pianist Harold Mabern, and percussionist Mobutu sometimes sends mixed messages. Earl Klugh has a few tasty moments on his own, and there are some reconnaissance flights back to the jazz side of George, which he handles with his usual confident aplomb.
Just listen to the first thirty seconds of this LP and you know that it’s all about the 'Godfather of Soul' – the unique James Brown.
But it’s just as obvious that such a great artist as George Benson doesn’t just present “Greatest Hits” in a new guise. Six of his own compositions plus one by Donny Hathaway/Gene McDaniels provide the guitarist and singer with a great platform to launch from. He shoots off into orbit, accompanied by first-class guest soloists such as Jon Faddis, Frank Foster, Earl Klugh and Jack DeJohnnette. Ron Carter’s bass doesn’t boom in the low register but offers a light and airy, yet solid, base.
"Body Talk" is by no means the declaration of a world-shaking, new and avant-garde jazz. It is, however, a successful blend of jazz, soul and fusion.
And when such a superb arranger as Pee Wee Ellis has his finger in the pie – or rather: his pen on the manuscript paper – then one can be sure that the almost 50-minute-long LP is a great success from beginning to end. Finally, one shouldn’t forget the helping hand of the producer Creed Taylor, who made a significant contribution to this milestone on the CTI label.
Recording: July 1973 at Van Gelder Studios, Englewood Cliffs, NJ (USA), by Rudy Van Gelder
Production: Creed Taylor
George Benson
Frank Foster
Gerald Chamberlain
Dick Griffin
Jon Faddis
John Gatchell
Waymon Reed
Harold Mabern
Earl Klugh
Ron Carter
Gary King
Jack DeJohnette
Mobutu
Tracks -
1/ Dance
2/ When Love Has Grown
3/ Plum
4/ Body Talk
5/ Top Of The World