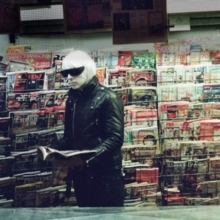 Drab Majesty's debut 'Careless', and their acclaimed second album 'The Demonstration' the following year, artist Deb Demure and collaborator Mona D. have firmly established themselves amongst the pantheon of dark synth-pop greats, establishing a devoted fan base worldwide with their singular hypnotic sound and mysterious, constantly-evolving presence. On 'Modern Mirror', each song tells a piece of Ovid's 'Narcissus' story, in which the listener's own self-identity has become warped and dissociated through rapidly expanding technology, losing touch with the origins of their own personalities.

Modern Mirror is a journey of self-reflection, nostalgia, love, beauty, and heartbreak told across eight addictive and emotional synth pop anthems – a seemingly classic tale delivered unblinkingly through the frame of the modern world.