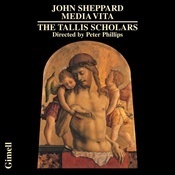 John Sheppard's reputation as a composer is still not fully established. Part of the reason has certainly been the lack of reliable editions of his music, when his contemporaries Taverner, Tallis, Tye, White and others have been promoted from the first decades of this century; but even now, with some recordings and many publications devoted especially to him, progress has been slow. We hope that with this first recording of his masterpiece Media vita, all doubts about his stature will be fully dispelled.

Various mischances concerning Sheppard's life and work have hindered understanding of what he achieved. It is always unfortunate when there are no firm dates of birth and death for a composer, since it is then impossible to have anniversary celebrations for him. Also, little is known about Sheppard's career, except that he was employed at Magdalen College, Oxford between 1543 and 1548 and also at the Chapel Royal from 1552 or before to 1559 or 1560 when his name disappeared from the list of Gentlemen. It is assumed that this disappearance was as a result of his death; but since he arguably made an important contribution to Anglican music after Queen Elizabeth's accession in 1558, a later date of death would certainly be a possibility.