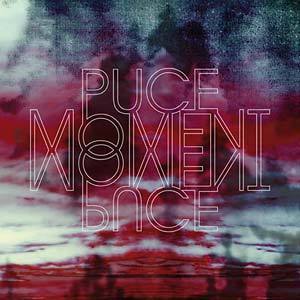 "Kenneth Anger may not necessarily be the name that will come to mind when listening for the first time -- distracted, confused, disoriented -- to Puce Moment's debut album. Yet it is the only one that will seem relevant upon second listen -- narcotic, infernal, fascinating. Puce Moment does not only borrow a title (of Anger's eighth short film, made in 1949) from the baron noir of experimental cinema. Ghostly wanderings, satanic Masses, mystical romances, mechanical hell: everything in the duo from Lille (France) and their album in the form of an invocation to ancient Sybarite authorities refers to the Californian filmmaker's obsessions. Launched in 2006 by Nicolas Devos and Penelope Michel, along with their project Cercueil (responsible for three albums particularly noteworthy),

Puce Moment has so far existed mainly on stage, diluted over time (a handful of concerts only) and image (projections, performances or contemporary dance pieces). Ice, dust and blinding flashes of white light: Puce Moment had the scene and the soul -- only backbone was missing. Isolated in a cabin, the duo composed and recorded nine songs that make up their first album, between spectral marauding ('Moonoom') and drone wizards ('Legacy'), resurrecting old ghosts ('Video Dada' single title survivor of their invisible past), and revealing the first images of a future draped in chrome ('L'ombre,' composed for choreographer Christian Rizzo's new project). Mastered by Joe Lambert (Animal Collective, Young Magic, Dirty Projectors), Puce Moment is both the sum of a singular journey, fueled by forays into dance and cinema -- a confirmation of their simply unreal abilities -- and the beginning of a long and disturbing procession."